If you are wondering if you are the only parent with babies eating dirt and why kids eat dirt in the first place then don’t worry because you are not alone – I have also experienced this firsthand and you are in the right place! Kids have this strange fascination with getting dirty that can make us adults shake our heads in confusion. It’s like there is a direct correlation with how dirty they are going to get and how much fun they are going to have.

Allowing babies to get a little dirt in their mouth while playing and exploring the world is natural and may provide some benefits to their cognition, mood, and immune systems. If they seem compelled to eat dirt, along with other non-food items such as hair, clothing, and plastic, however, it could be a sign of pica – a potential indicator of a serious health problem.

My kids have always wanted to jump into or otherwise become as one with the dirt around them. Sometimes our only hope in these situations is that there is a hose nearby or this is all happening at grandma’s house so she can deal with the consequences. Aside from messes and gross things, is there anything wrong with this? Let’s look at the potential benefits as well as explore pica a little more.

Why babies eating dirt can be good

I decided to look into this topic after diving into the connection between germs and babies. From what I’ve found, letting your babies and older children get a little dirty while they are outside playing is probably a good thing. Aside from the physical benefits of outdoor play, they are being exposed to a huge assortment of naturally occurring bacteria and other microbes that have been shown to improve health in a variety of ways. Although you probably shouldn’t let your child spoon mouthfuls of dirt into their mouths, the trace amounts that get in there from hand-to-mouth contact are enough to get things moving!

In fact, it is looking more and more like our kids should be playing in the dirt more often so that they can be exposed to more and different kinds of naturally occurring bacteria, microbes, and other microorganisms. I’m not going to go into the whole thing here, but check out my other post on babies and germs to learn about how babies’ immune systems and overall health could benefit from exposure the ‘good germs’ in nature.

Suffice to say, letting kids roll around outside and get dirty is a great way to expose them to some of those good germs and let them have fun and get exercise at the same time.

Plus, just stop and think of how often you were outside rolling around in the grass and whatever else while you were outside playing in the neighborhood. I, for one, was outside almost constantly and most of my favorite memories of playing when I was little didn’t come from inside on a video game console (although I still love you, Super Mario Brothers!). The best memories were those happened in the hours before I walked back inside the house, cringing as I waited for my mom to yell in shock at how dirt I had gotten.

Most people these days have heard about probiotics and they are quickly turning into a mainstream element of modern health and fitness.

Basically, probiotics help introduce new or support the old bacteria that is naturally found inside the human gut. While much of the benefit of these bacteria is still not fully understood, there is a growing body of scientific work that shows a direct link between gut health and the overall health of the body. They have been shown to improve digestion, cognitive ability, mood, energy levels, and much more. They are also showing promise as a way to help treat gut-related auto-immune disorders such as Crohn’s and Irritable Bowel Syndrome.

So, how is this related to babies eating dirt?

People such as Professor Graham A.W. Rook at the University College in London have been doing a lot of research into this topic, which he calls the ‘old friends’ hypothesis. In a nutshell, he contends that modern society has become separated from the natural symbiotic relationship that developed as we evolved alongside bacteria and other microorganisms throughout history. Basically, we’ve been separated from our ‘old friends,’ the bacteria, that help us with our physiology and metabolism, among other things.

Many of these beneficial bacteria are living in the environment around us and were naturally introduced into the human body as we walked barefoot through the wilderness, hunting and gathering our food. Over time, we developed a symbiotic relationship with these bacteria in which we let them live inside us and they, in turn, help with different functions within our bodies.

Here’s a great example of some interesting benefits that soil bacteria can provide.

One of the symbiotic bacteria that has been found in the dirt is called Mycobacterium vaccae (M. vaccae) and studies have found that it can boost the production of serotonin in the brain. Serotonin is one of the primary chemicals in the brain and it is responsible for managing stress and anxiety.

When cancer patients were given doses of the bacteria, their moods and emotional health improved. It’s now being tested as a viable treatment option for PTSD and other brain traumas or injuries. This is real science.

Would you ever have thought that babies playing in the dirt could help improve their little moods and brainpower?

Yeah, but is it really safe to have babies eating dirt?

Of course, there are a bunch of reasons why you wouldn’t want to let your little one to eat or even play in the dirt in certain situations. Here are a few things to watch out for at any outdoor play area:

Depending on what the baby is actually putting in their mouth, you could also run into trouble with choking, gagging, intestinal upset, diarrhea, or other complications related to eating things that aren’t good. Frankly, it’s a good idea to scan any public park to make sure there aren’t any random unsafe objects left on the ground or stashed under the seats.

I’m constantly worried about my kids playing in areas where weed killers and pesticides have been sprayed because they can be so dangerous for humans. Ugh, it’s so hard to avoid that kind of stuff. Depending on your location, you can also be on the lookout for so-called ‘organic parks‘ that pledge to avoid using those sorts of chemicals to make it safer for children’s play.

A great option for folks that want to let their kids play safely in the dirt to get all of the great benefits while avoiding as much danger as possible should consider making a space for them that includes child-friendly soil. This area will be a place that you control so that you can ensure there isn’t anything dangerous contaminating it. 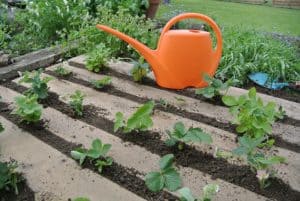 Another great activity, especially for older kids, is to start an outdoor garden and let them get their hands dirty in the soil! Just be sure that you are using organic products and being careful around things like fertilizers – even if they are natural!

I also found a really cool DIY raised sensory dirt bin idea from the folks over at Screen-Free Parenting if you want to check it out!

Signs and symptoms that your baby might have pica

I mentioned this earlier, but it’s definitely possible for your baby to take the dirt eating too far. Pica is a surprisingly common eating disorder that affects as many as 30 percent of children under 6. Those suffering from pica will be compelled to eat many different non-food items which can cause a whole host of issues.

Children with intellectual or development disabilities are more likely to suffer from this condition.

Here are the common symptoms:

It’s important to point out that babies explore the world with their mouths and it’s completely normal for them to want to chew on random objects. The distinction here is that they keep ingesting the non-food items even after it makes them sick or hurts them. If you suspect that something is out of the ordinary with your baby then you should see a doctor immediately!

Fortunately, pica usually goes away on its own in normal children as they grow up.

So, should I let my baby play in the dirt?

I’ve always been of the opinion that a little dirt is good for kids and adults alike and after taking the time to research this topic I feel good about my instincts. There will always be some danger involved with anything, but in my opinion, the benefits far outweigh the negatives in this case. Playing outside is a completely natural activity that humans have been doing for years, after all. Long before video games and couches, there was just an interesting pile of dirt and some sticks to poke it with. Those were the days, right?

What are your thoughts on kids playing in the dirt and even trying to eat it while we aren’t looking (I mean you have to EAT mud pies, right??)

Let me know in the comments!

link to Do Your Baby's Hands Stink? Here Is How To Get Rid Of The Smell!

Once the newness wears off it's pretty common for babies to start smelling a little funky and their hands are no exception. Since many parents are likely struggling with stinky baby hands I thought...

My lovely family is up to four children so we have a lot of experience with finding middle names. It can be pretty difficult to find the perfect middle name once you have nailed down the first name...