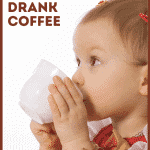 All babies get into stuff that they aren’t supposed to, and sometimes that includes your morning coffee. If your little one guzzles your cup of joe, are they going to have caffeine jitters for the rest of the day? Should you call Poison Control?

How much coffee is too much, and can small amounts of coffee actually be good for your baby to drink? Keep reading to find out!

Is it bad if a baby accidentally drinks coffee?

Yes – it can be dangerous if a baby accidentally drinks coffee.

A few drops of coffee shouldn’t cause your baby any harm, although your child may get some caffeine jitters if they’ve managed to swallow enough of the drink. If your baby drinks enough coffee, though, they may be in danger of a caffeine overdose.

While adults can easily process the amount of caffeine found in a cup of joe, babies and young children can’t handle the caffeine levels. Even small amounts of caffeine can be dangerous for kids; in fact, the American Academy of Pediatrics (AAP) recommends that children under the age of 12 shouldn’t consume any caffeine at all.

Caffeine poisoning can lead to symptoms such as difficulty breathing, severe shaking, vomiting, or seizures. If you believe your baby has caffeine poisoning, you should call poison control or seek immediate medical treatment.

What to do if baby accidentally drinks coffee

If your baby accidentally drinks coffee, you should try to figure out how much they’ve had. A few drops of coffee shouldn’t be a problem, but large amounts or extra-caffeinated varieties of coffee can lead to caffeine poisoning.

After determining how much coffee your baby might have had, check for symptoms. You may notice some jitteriness or irritability if your little one has had only a small amount of coffee. Large amounts may cause vomiting, severe shaking, or difficulty breathing.

Depending on the severity of the symptoms you observe, you should:

Seek medical help. If your baby has severe symptoms (vomiting, severe shaking, difficulty breathing) or has had a large amount of coffee, you should call Poison Control immediately (1-800-222-1222). Poison Control will likely ask you how much and what type of coffee your baby drank, the age of your child, and any symptoms you see. If your child can’t breathe or is having a seizure, call 911.

When can children have coffee?

The AAP recommends that children under the age of 12 shouldn’t drink anything with caffeine, coffee included.

Once your child turns 13, experts recommend they limit their caffeine intake to 100 mg each day until they turn 18. Too much caffeine can impact a teenager’s brain development and lead to insomnia or trouble sleeping. A single cup of black coffee contains around 95 mg of caffeine, so your teenager shouldn’t be drinking more than one cup of coffee a day.

Not only does coffee contain caffeine, many people like to mix their coffee with sugar, creamer, or other additives. This extra sugar and fat can increase the number of empty calories in a cup of coffee, which can make your child feel full without providing them with any valuable nutrients.

While your child can start drinking a cup of coffee each day when they turn 13, you should try to limit their coffee intake to ensure your child’s diet remains healthy.

Is it okay if a baby drinks decaf?

While decaf coffee doesn’t include much caffeine, one cup can still have 2 mg of the stimulant, as well as any added sugars, creamers, or flavorings.

While you probably won’t have to call Poison Control if your baby accidentally drinks your decaf coffee, you also shouldn’t be purposefully giving it to your little one to drink.

Is too much caffeine bad for babies?

Children under the age of 12 should avoid caffeine entirely, although children older than 4 can consume a small amount of caffeine occasionally (such as a small caffeinated soda or some chocolate).

Consuming more than 50 mg of caffeine per day can be dangerous for children, and may even impact their long term health and development.

How much caffeine is dangerous for baby?

While caffeine poisoning levels can vary based on the person, a good rule of thumb is that you shouldn’t consume more than 2.5 mg of caffeine per 2.2 pounds of body weight per day. Babies can weigh anywhere from 7.6 pounds at birth to 22 pounds on their first birthday.

How much caffeine is dangerous for a toddler?

Toddlers, on average, weigh 22 pounds on their first birthday, and 30 pounds or more by age 3.

That means a toddler can experience caffeine poisoning after drinking 25-35 mg of caffeine (30-50% a cup of coffee, or 1 full can of Coke).

Signs of a caffeine overdose

Signs of a caffeine overdose include:

If your baby is showing signs of a caffeine overdose or has consumed an excessive amount of caffeine, call Poison Control at 1-800-222-1222 or seek medical help immediately.

What does caffeine do to a child’s body?

Caffeine is a stimulant, which means it works within your central nervous system to keep your body alert. It can cause a rise in blood pressure, a rapid heartbeat, and sometimes even muscle tremors.

While caffeine can be a useful drug for adults, it is still a drug, and it affects children differently. Caffeine can make sleep difficult for your child, and it may also make them anxious and moody. Children also have a more difficult time processing caffeine, so even small amounts can lead to a caffeine overdose.

How long does caffeine stay in baby’s system?

Babies aren’t as efficient at processing caffeine as adults are.

That means that it can take over 90 hours for a newborn to stop feeling the effects of caffeine in their system, as opposed to 14 hours for a 3-5 month old, and 4-5 hours for an adult.

Small amounts of caffeine can linger in the body for even longer.

Caffeine primarily affects the body’s ability to sleep, which can slow the growth and development of the brain.

While some experts have suggested that caffeine can negatively interfere with bone health and density, current studies have found that as long as a person is consuming the recommended daily value of calcium, there is no evidence that caffeine is harmful to bone development.

With that being said, the effect of caffeine on bone development in babies hasn’t been studied, so it’s best to steer clear.

Other concerns with baby drinking coffee

In addition to caffeine, there might be other concerns when it comes to your baby drinking coffee:

Caffeine is a stimulant, which means it literally wakes people up.

Giving your baby even a little bit of coffee will only keep your baby up, not help them fall asleep.

As adults, we probably don’t iron a lot of our clothes unless something is particularly wrinkled or it’s a special occasion. But what about baby clothes? Can you iron them? Should you?  Ironing...

Continue Reading
link to My Baby Likes To Hang Upside Down (Is It Play or a Sign of Autism?)

As your baby is exploring movement and new ways to play, you may find them exhibiting behaviors that are unexpected or concerning. For instance, some babies like to hang upside down. Is this standard...