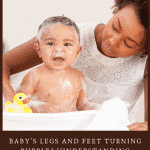 Usually when you think of babies, pink and blue nurseries come to mind, not purple skin. While most infant skin conditions are nothing to worry about, some can be a signal that something is happening inside the body. While it’s not unusual for babies to have a temporary purple tint to their limbs at times, it’s important to understand why it happens and what to look for to make sure it isn’t something more serious.

Acrocyanosis causes the hands and feet have a blue or purple tint. This is common in babies-especially after birth and is usually nothing to worry about. This happens because blood is being directed to major organs the brain and heart rather than the limbs. Once the blood begins to circulate regularly this will go away. It’s not uncommon to see this again on occasion.

Acrocyanosis is often a temporary condition that will fade away and may appear from time-to-time situationally, but what if it doesn’t? What if it worsens? What other symptoms should you be aware of to avoid a life-threatening situation? Can this be confused with other disorders or ailments? Seeing a skin color change can be alarming, so understanding what to look for can help in case of an emergency.

Why do baby hands, legs and feet turn purple?

The human heart functions as a pump that carries blood to all areas of the body through the use of veins and arteries, which make up the circulatory system (of which you have two: pulmonary and systemic). Blood carries oxygen throughout the body and is returned to the heart where it is then sent to the lungs to collect oxygen and carry it throughout the body.

So, what happens if the cycle is interrupted somehow?

Sometimes that can mean illness, alert an emergency situation, or it can be from something as simple as exposure to cold temperatures.

Acrocyanosis is a condition that causes the limbs to have a blue or purple tint and is quite common in newborns in the hours after birth. Acrocyanosis happens in the first few hours of life because blood is concentrating on getting to baby’s vital organs, like the heart, brain, or kidneys, before getting to the limbs.

There are two types of acrocyanosis: primary and secondary.

That depends on whether the condition is primary or secondary.

Primary acrocyanosis in newborns is generally due to the blood beginning to circulate normally focusing on vital organs first and extremities second in the first hours of life. It’s generally benign, meaning not harmful, and will often go away on its own. If you notice this after baby’s hospital stay following birth, it’s generally due to constricted blood vessels caused by exposure to cool temperatures (blood vessels aren’t carrying enough oxygen to the limbs). Have you ever noticed your hands turn purple when you’re out in the cold without gloves? Primary acrocyanosis responds to warm temperatures and movement (like a warm bath or rubbing the limbs).

Symptoms of acrocyanosis include:

Oftentimes symptoms of acrocyanosis will improve with warm temperatures and movement and worsen with cooler temperatures.

Acrocyanosis, while usually a harmless, temporary condition, can sometimes be mistaken with other conditions:

How long do newborn hands and feet stay purple?

It’s not unusual for a newborn’s hands or feet to look purple for up to 24-48 hours after birth.

Acrocyanosis is not a persistent condition in newborns or infants, so if it doesn’t go away then medical assistance should be sought to rule out other causes.

Is it normal for newborn hands, legs, or feet to turn purple?

Acrocyanosis, or discoloration of the limbs in newborns, is quite common and usually resolves within 24-48 hours following birth. This is caused due to baby’s circulatory system adjusting to life outside the womb; baby’s blood is busy circulating to vital organs first before reaching the limbs causing legs or feet to look purple.

This condition can also occur after temperature changes-like after a bath or being outdoors in cool weather.

What if purple hands, legs, and feet turn blue?

At times, the discoloration caused by acrocyanosis can be described as casting a purple, blue, or dark tint to a baby’s skin-especially in the limbs. In darker-skinned children this can be hard to spot. Most times this is no cause for grave concern and is often the result of temperature changes or other benign factors. If baby has darkened limbs but normal-appearing skin elsewhere and baby is breathing fine then this is typically no cause for concern if the skin returns to normal in a timely manner.

However, if baby’s skin appears darkened and blue then this could be a signal that insufficient oxygen is getting to baby’s lungs or the blood supply is sluggish. Seek medical attention.

Oxygen is what makes blood turn red and red blood cells without oxygen will have a blue color (cyanosis).

If baby has a bluish appearance over the entire body, this can be a worrisome sign that the blood is lacking sufficient oxygen. It is especially critical to seek medical attention if this symptom is coupled with trouble breathing.

Baby’s hands and feet turn purple after the bath

Acrocyanosis can occur after bath time. One of the causes of primary acrocyanosis is temperature changes causing a restriction of blood vessels, which may cause a temporary darkened (blue or purple) tint to the skin, particularly in the hands, feet, and legs. Get baby warmed up and monitor the change in color to be sure it changes back to normal.

What if baby’s legs turn purple when crying

It is common for babies to appear discolored (like blue or purple) when they’re crying; this is called peripheral cyanosis. Cyanosis is a condition that describes an oxygen restriction to the blood cells causing them to appear blue. Blood flow to the lungs has been reduced and therefore retains a bluish tint due to lack of oxygen.

What if baby’s legs turn purple in the carrier

This is likely a cause of poor circulation. You may want to adjust positioning in the carrier and be sure that it’s the proper size for baby and that any straps are not excessively tight.

Again, this is likely the cause of an underdeveloped circulatory system causing some minor discoloration. If baby’s skin returns to normal after changing their position, then it’s likely nothing to worry about.

This can be something as simple as a bruise or as serious as meningitis.

Meningitis is a life-threatening illness that often has a “pinprick” rash or purple, bruise-like marks anywhere on the body. If you notice a spot like this on baby’s body (foot, leg, or anywhere) accompanied by other symptoms, seek medical help immediately.

Other symptoms of meningitis include:

Baby’s who are ill with meningitis should be given immediate medical attention as this condition is serious. Learn more about meningitis and septicemia here.

While usually a minor discoloration in baby’s hands, legs and feet is nothing to worry about, trust your instincts. If discoloration doesn’t improve, worsens, or is accompanied by other troubling symptoms then don’t hesitate to call your healthcare provider for further help and instructions. Your child may need medical attention in some cases.