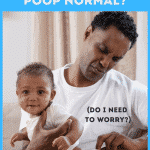 Despite being one of the less appealing aspects of having a new baby at home, poop is often at the forefront of any parent’s mind. We learn pretty quickly what a normal poop looks like, but what about when the mess in the diaper doesn’t look the way we expect it to. If you’ve ever found black specks in your baby’s poop, you’ve certainly had to stop and ask yourself (and probably Google) if they’re normal or if you should be concerned.

Black specks in a baby’s poop are usually caused by undigested foods such as blueberries, blackberries, bananas, or beans. However, poop resembling wet coffee grounds could be a sign of gastrointestinal bleeding and you should call your pediatrician immediately. If your baby is less than a week old, it is likely still the meconium.

Read on as I dive into what can cause baby’s poop to have black specks in it and when you should be concerned.

Why does my baby’s poop have black specks?

Babies have a pretty solid routine right out of the gate: eat, sleep, poop. Repeat. As parents, our focus becomes how much our babies eat, how long they sleep, and what their poop looks like. Poop even becomes a dinner table topic amongst parents with conversations reduced to when did baby go last, was it a blowout, and what color was it. While the first two topics are mostly for entertainment, the last one can be more serious.

When it comes to a baby’s poop, there are several reasons for the ever-changing shape and color. Let’s talk about the differences between breastfed and formula-fed babies. Because breast milk is easier to digest than formula, most breastfed babies have an easier time with digestion than formula-fed babies, resulting in less diarrhea and constipation. Also, whether a baby is breastfed or consumes formula can account for the varying colors in her poop. Newborns who are breastfed typically have mustard-colored, seed-like poop, while those who are formula-fed tend to have yellow or tan with green poop that is a bit firmer.

At about six months of age, most babies begin to include solid foods in their diet, which is also the same time babies’ digestive systems hit a milestone. Before we talk about that, it’s important to note that the baby shows signs of readiness before introducing solid foods. This can include being able to hold her head in a steady, upright position and sitting without support.

Babies’ digestive systems are usually developed enough to handle solid foods by six months of age. Once she begins to eat a steady diet of solid foods, her poop will change again! It will become more solid, the color will vary based on what she recently ate, and it will include things like fruit skin and seeds in it. Oh, and the smell will get stronger, too.

As their digestive system continues to develop, they will have an easier time digesting foods. Until then, any foods they are unable to digest will just pass right through to their diaper. In most cases, baby’s poop has black specks due to their inability to digest certain foods or milk, or it could be caused by something more serious, such as gastrointestinal bleeding.

If it seems like baby’s stools are very loose or watery, something they ate could be irritating the digestive tract. If this happens, reducing the number of solid foods can help. If the loose, watery poop continues, it’s best to consult your pediatrician.

Just remember that baby poop can to transition into many different colors and textures, especially during her first year, and it’s usually nothing to worry about!

With that said, there are some times to worry…

Is it normal for baby poop to look like coffee grounds?

The coffee ground like appearance would be caused by old blood in the digestive tract, which is a serious concern. If you think your baby’s poop resembles wet coffee grounds, save the diaper and call the pediatrician immediately.

In newborns during the first week of their lives, their poop, called meconium, will have a black tar-like appearance. This is completely normal. After their first couple of poops, the poop will begin to look more normal in appearance.

Once your baby begins to eat more solid foods, any food that they did not digest can be passed through their poop, giving their poop black specks or a darker color.

Below are some of the most common reasons you may see black specks in baby’s poop, including when not to worry and when it’s more serious.

Black specks could indicate a milk protein allergy if you are giving baby milk.

It may be best to consult your pediatrician about potentially eliminating milk protein from baby’s diet to rule it out as the cause if you are seeing continual black specks. If your baby does have a milk allergy, your doctor may recommend bringing it back to their diet once their digestive system has developed further.

Bananas, a common favorite amongst babies, can contribute to the appearance of black specks in baby’s poop. This will likely look like little black threads in the poop, and is actually the center part of the banana. This is no cause for concern.

Many parents find it helpful to mash up the banana to help baby digest it easier. In fact, mashed banana is commonly offered as a first solid food for babies.

Berries are another food group that can cause black specks in baby’s poop.

Because they can be more difficult to digest than other foods, the skin or seeds from the blueberries and blackberries can be left behind in the poop. The dark coloring of the berries can also turn the poop a dark color. This is no cause for concern.

To make the berries a bit easier to digest for baby, parents often offer them as a puree. And, until a baby is 12 months old, it’s recommended that the berries be cut up or mashed.

Beans might not be a common first food for most babies but cooked beans are extra soft and can be quite easy for a baby to pick up, mash between their fingers, and eat!

Black specks in baby’s poop can also occur when baby eats iron-rich foods like black beans. This is caused by the outer part, or skin, of the bean not being fully digested. As with the other foods mentioned above, this is not a cause for concern.

When your baby is ready to try beans (which is generally around 7-10 months), just a tablespoon or two of cooked, mashed beans is a great start. Some beans are easier for babies to digest than others, so you may try several out if you find your baby struggling with one in particular.

If you give your baby Colic Calm Gripe Water for colic, gas, or reflux, you may see black specks in baby’s poop or notice that the poop is a dark color.

Vegetable charcoal is one of the main ingredients in Colic Calm Gripe Water, which is completely expelled through poop and will darken baby’s poop, and even cause little black specks in the poop.

Old blood in the gastrointestinal tract can cause a baby’s poop to have black specks, but it will look different than specks you would see from undigested food or milk, or even the Colic Calm Gripe Water.

In this case, the poop will closely resemble wet coffee grounds. It will look very different from fruit skin or seeds.

This is something you need to talk with your pediatrician about immediately.

When should I worry?

If the black specks in baby’s poop resemble coffee grounds, it’s time to call the doctor. It will be helpful to your pediatrician if you can keep the diaper to take with you when you go. That way, the doctor can check for blood.

If, in addition to the black specks, a baby shows any of the following symptoms, the baby should be taken to the doctor: