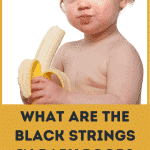 As a parent, especially a new parent, seeing the black strings in your child’s poopy diaper can be disconcerting! All the questions that pop up! Is this bad? Is my child sick? Did I feed them something dangerous? Do we need to go to the doctor?

Black strings or worm-like pieces in baby poop is most likely undigested banana. Her digestive tract is still maturing and certain foods (or parts of food) may be more difficult to process than it would be for an adult. Babies also poop frequently so it’s not uncommon for food not to be fully processed.

So let’s get a little deeper into this and see what different situations could cause this to happen!

Yes, black stringy poop for infants is not uncommon at all!

Almost all children will have this at some point in their early months, but it is most likely to happen in the first few weeks after the baby comes home from the hospital.

The primary cause of this is undigested food (or milk) or even mucus in the baby’s stomach. Remember, the little one has only started feeding through their digestive tract after birth. Their stomach lining and intestines are still getting used to processing nutrients that are not fed directly to them via the umbilical cord.

The black stringy poop normally goes away on its own after a few short weeks.

What are the black strings in my baby’s poop?

If you find black strings or worm-like substances in your baby’s poop, there are several common sources that are not causes for concern, including undigested fruit, actual string, or mucus.

A common cause of stringy black in a baby’s poop is the fiber from bananas and other fruits.

One of the reasons we feed bananas to our children is the fiber they contain; however, if they consume too much, they cannot process it fully. Bananas are soft and easy for babies to consume, and most children love the taste as well, which can lead to them eating more than their tiny little bodies can process in a single day.

This is not harmful, but it would be best to lessen the amount so their little system doesn’t have work so hard. Now, the undigested fiber is not a cause for worry, but it is a good indicator to cut back (not cut out) their daily banana intake.

If the child is of crawling or toddling age, there is also a possibility of the black strings being hair or thread of some kind. Remember, children put just about anything they can get their hands on in their mouths! So, if they find a piece of string from a blanket or some hair that fell off the hairbrush, they will put it in their mouth.

Obviously, the body does not digest these things so it just passes through and comes out the other end.

The best way to tell the difference between fruit fiber and string or hair is that fruit fiber does not hold together while you are wiping the baby’s bottom, it comes apart in little clumps or small almost dirt-like pieces. Hair or string, on the other hand, stays in one piece while you are trying to wipe it away.

If it is string or hair, only pull VERY gently, and if it does not easily remove, LEAVE IT! It has not fully been pushed through the digestive tract and we do not want to be causing any pressure in there.

If it still has not passed through in a couple of days, contact your pediatrician for advice on how to assist the string or hair to pass through fully. I personally have never seen it not pass in a day or less in any of my children.

Black strings can be caused by mucus in the poo and is not a concern if the baby is still very young. If your child is a little older (2-4+) then just pay close attention to the texture, size, and the child’s behavior.

While the digestive functions are still developing, there can be some mucus that needs to be passed through that is leftover from while the child was still in the womb.

You can easily identify if it is actually mucus as it has the same texture and looks like when you have a badly running nose or cold. Unlike nasal mucus, this is black or dark brown in color due to its being mixed with the toxins that are being expelled during normal bowel function.

Meconium is a substance that lines the baby’s stomach during pregnancy and is usually released after birth over the first few days to weeks. Meconium helps protect sensitive intestines while they are forming.

Seeing it present in little one’s stool only means that their tiny body is adjusting well to the outside world.

When should I worry about black stringy poop?

There is a very short list of times when black stringy poop would be a concern. So we can cover this briefly to put all of our overactive parent minds to rest.

If it’s accompanied by other symptoms

A food allergy or intolerance may cause some unpleasantness in the diaper, but it is usually combined with a runny nose, mild fever, and sometimes small traces of blood in the stool as well. Your baby’s little backside will likely be inflamed a bit, and a strong diaper rash may also occur.

If it’s more than a little bit of ‘string’

While the occasional hair or string in your baby’s poop is grosser than concerning, a lot of it is a different matter.

Since not even adult digestive systems can process hair, a large clump may not be able to pass through by itself. If this is the situation, give it some time (about a day) and pay close attention to the child’s bowel movements. If the bowel movements slow, or appear painful, or even stop entirely, then you should seek expert help!

Black stringy poop in a baby’s diaper can be worrying at first, but now that we know that it is not a big problem, we can relax and get back to enjoying their amazing and precious little antics as they learn and grow!

Your child has been excitedly wiggling his loose tooth in anticipation of the tooth fairy for what feels like months now only to realize he swallowed his tooth while sleeping. Is this harmful to your...

Many experts consider purees essential for introducing your little one to solids. However, purees are not meant to comprise a large part of a baby’s diet, and they should be eliminated once your...