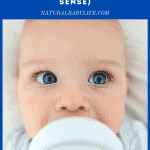 Somewhere along the journey of parenthood, you’ve probably been told it’s important to heat up your baby’s formula. But in the middle of a midnight feeding, it’s likely you’ve found yourself asking if all the extra effort you put into gently warming your child’s bottle is actually necessary. Is cold formula really going to cause problems for your baby?

Can babies drink cold formula? There is no problem with babies drinking cold formula as it doesn’t have a significant impact on their sleep, movement, eating habits, weight gain, temperament, or spit-up. Anecdotal reports of cold formula causing digestion and gassiness issues with babies have not been supported by scientific studies.

Some children refuse to drink cold formula, and that’s okay! If your baby is particular about the temperature of their meals, keep reading for some helpful tips and formula guidelines.

Is it okay for babies to drink cold formula?

As far as science goes, there isn’t anything wrong with serving your baby cold formula. Anecdotally, however, it seems to be a different story. After all, it makes sense: milk straight from the breast comes out at a toasty 98 degrees Fahrenheit. If the formula is being used as a substitute for breast milk, it seems more natural to heat the formula to about the same temperature as the fresh milk you would normally be feeding your baby.

Even though it’s common practice to gently heat a baby’s formula until it is lukewarm, it’s actually not scientifically necessary to do so. Studies have shown no significant difference between babies who drank cold formula when compared with babies who received warm formula. On average, the babies in the study had similar sleep patterns, ate just as much food, and progressed at a similar rate.

In fact, heating formula can potentially put your baby’s food at risk. Improper heating can create hot spots in the liquid that can burn your baby’s mouth. Overheating formula, even if it’s later cooled down to the correct temperature, can also destroy important nutrients inside the formula mix.

If you’ve tried serving your baby cold formula and they’ve refused to take it, that’s okay! Just as adults have preferences for food temperature, some babies prefer their formula to be warm. If you want to continue heating your baby’s formula, make sure you follow the proper procedures to keep everything safe.

Here are some guidelines to remember:

What temperature should baby formula be?

Formula companies, however, recommend mixing their formula with cool water (35-75° F). If your baby prefers drinking their bottle warm, you can mix the bottle using cool water and then run it under warm water until it reaches the desired temperature.

If you aren’t planning on using the formula immediately, you should mix the formula using cool water and then refrigerate until needed.

Can you mix formula with cold water?

As mentioned above, formula companies actually recommend mixing their formula with cool water.

It’s best to mix formula with cool water, and then carefully warm the bottle to your baby’s preferred drinking temperature. If you’re using tap water, experts recommend boiling the water for a minute, letting it cool, and then adding formula powder and reheating it to the desired temperature.

Can babies drink formula straight from the fridge?

If your baby doesn’t mind drinking cold formula, they can drink a bottle straight out of the fridge. After all, when your child gets a bit older and starts drinking regular dairy milk, you’ll pour straight from the fridge into their bottle or cup.

If you’re mixing bottles for your baby ahead of time and storing them in the fridge, make sure you’re still following safe formula standards:

Is cold formula harder to digest?

According to a Journal of Pediatrics study, cold formula isn’t any harder for your baby to digest than warm formula. Digestion depends more on what is in food than on what temperature it is when your baby consumes it.

Does cold formula cause gas?

As far as science knows, there’s no indication that cold formula causes gas. If your baby is suffering from gas bubbles, it’s more likely to be caused by the type of formula your baby is eating, or the way they’re eating it.

If you’re overmixing the formula, your baby might be swallowing bubbles along with their meal. You might be using the wrong nipple size on the bottle, or your baby might have a problem with the bottle itself. Try testing out some new combinations, and see if anything helps.

Does warm formula help with gas?

Warm formula hasn’t been proven to help with gas, but it certainly won’t make it any worse. Having a warm drink can help calm your baby, making them comfortable enough to work through their gas bubbles.

A warm bottle can also help your little one drift off to sleep, which can relieve some discomfort that comes along with gas.

Can cold formula cause constipation?

It’s very unlikely that the temperature of your baby’s formula is causing their constipation.

Constipation is caused primarily by the nutritional contents of the foods your little one is eating, rather than the temperature of the food. If your baby has switched from breast milk to formula recently, then that switch is the likely culprit. Switching to a different type of formula, or switching from formula to solids, can also cause constipation.

When can babies have cold formula?

If your baby prefers drinking their formula cold, you can serve them a cold bottle for each feeding. Cold formula can be much easier to prepare and serve, mostly because you don’t need to go through the hassle of heating the bottle before each feeding.

If your baby insists on a perfectly warmed bottle, there’s no need to push for cold formula. Ultimately, the temperature of your little one’s bottle depends primarily on their personal preference. As long as you’re following safe food guidelines for the formula and making sure the bottle isn’t too hot, it’s fine to let your baby choose the temperature of their food.