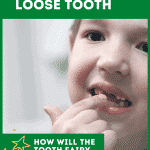 Your child has been excitedly wiggling his loose tooth in anticipation of the tooth fairy for what feels like months now only to realize he swallowed his tooth while sleeping. Is this harmful to your child?

If your child swallows a loose tooth, there’s no reason to worry. Unless he shows signs of choking or distress such as drooling or chest pain, the tooth will pass harmlessly through his digestive system and be passed as part of the solid waste. As a parent, your biggest concern will be how to explain the tooth’s absence to the Tooth Fairy.

Read on to find out what exactly happens when your child swallows a tooth and if there are any risk factors to worry about, as well as some tips for how to ease his mind about missing a visit from the Tooth Fairy.

What happens if my child swallowed his tooth?

Children have been known to accidentally swallow loose baby teeth whether at night while sleeping or even while eating.

When that tooth is ready to come out, it just comes out. Chances are, your child will not even know they lost it, let alone swallowed it. It will only be when you are unable to find the tooth that you will begin to wonder if it was swallowed.

The majority of the time, when foreign objects are swallowed, they pass through the digestive system without any problem. Due to the extremely small size of a baby tooth, it is highly unlikely your child will have any issues with their swallowed tooth.

If your child starts drooling, having difficultly swallowing, or having chest or neck pain, take him to the doctor or hospital immediately as these can be symptoms of something being stuck in the esophagus.

When do children lose baby teeth?

Losing baby teeth, especially the first one, is a significant milestone for young children.

On average, most children lose their first tooth at age six, although this can vary from child to child and may begin as early as age five or as late as age seven. Typically, it’s the bottom two front teeth that become loose first, also known as the lower central incisors.

The top two front teeth, or upper central incisors, usually follow, typically in the same order as they came in. Then the pattern continues with the lateral incisors, the 1st molars, canines, and 2nd molars, although these teeth are usually lost at a later age.

How to pull a child’s tooth

Sometimes baby teeth can just be stubborn and not want to come out. The risk of an overly loose tooth is that the tooth could fall out in your child’s mouth which could cause them to swallow it.

We probably all have childhood memories (or nightmares) of our parents sticking a pair of pliers in our mouths to fetch a loose baby tooth or tying a string around it but there are other dentist-approved (not to mention hygienic) measures we can take to help remove wiggly baby teeth to prevent our child from swallowing it.

What to do if child swallowed loose tooth?

If your child has swallowed a loose tooth, more than likely it will pass through their digestive system without any issue at all. The only potential issue could be if the tooth became lodged in the esophagus.

While it’s not likely to cause any ill physical effects, your child will probably be worried about having swallowed their tooth either because they don’t understand that it won’t hurt them or because they’re worried the Tooth Fairy won’t come if they can’t leave a tooth under the pillow.

The best thing you can do for your child, in this case, is not overreact. Explain to him that the tooth won’t hurt him and that you happen to know the Tooth Fairy is very understanding and will know what happened.

Although unlikely, be on the lookout for any signs of choking or esophageal distress if your child has swallowed a tooth.

Signs that your child  may have a tooth stuck in his esophagus include:

Take your child to the doctor or hospital immediately if your child is in distress.

If your child has swallowed a tooth but is eating and drinking okay, chances are there is nothing to worry about. Just let their digestive system handle what it was designed to do.

It may be beneficial to give your child some bowel-stimulating foods rich in fiber such as whole grains, apples, beans, or berries to help pass the tooth sooner. Also, give your child lots of water or juices such as pear, prune, or apple juice.

Don’t be concerned if you never see the tooth come out – either it was completely dissolved by the stomach acids or it was encapsulated in your little one’s waste.

What happens if a child swallowed a loose tooth?

Once your child has swallowed a tooth, it will move through his or her digestive tract starting with the esophagus. The esophagus is a tube that carries food to the stomach.

Your child’s tooth will be broken down by stomach acids and varying digestive enzymes along the way. Whatever is left will be eliminated as solid waste.

Will the Tooth Fairy still come if child swallows a loose tooth?

An important hallmark of kindergarten is talk of wiggly teeth and big gap-toothed smiles. It becomes a source of pride for a child to get to talk about how many teeth they lost and how much money they’ve made.  So finally losing a tooth only to swallow it can be a travesty to a child, and for good reason!

Will they not get their money now? They’ve been waiting weeks for this!

Of course, the Tooth Fairy will still come. She has been exchanging money for teeth for years and your child is not the first to swallow a tooth.

Sometimes, simply leaving a picture of the lost tooth or a note explaining what has happened will be all the Tooth Fairy needs. Also, the Tooth Fairy is moving up in the world these days and has a cell phone so mom or dad may just have to send her a text.

Letter to the Tooth Fairy

If your child is still anxious about the tooth fairy not coming or not leaving him any money, maybe helping him craft a letter to the Tooth Fairy will ease his worries.

For your creative kiddos, you can make this as detailed as possible with fancy paper and pretty markers. Or, if you’re like me you can have him scribble it on a ripped page of notebook paper. Let him explain in his own words what happened and have him draw a picture of the tooth in his belly. He could also include a drawing of his mouth sans tooth for good measure.

Depending on how much time the Tooth Fairy has, she may even leave a note back saying she appreciates the explanation and that she will find the tooth with her magic.

I'm the dad in charge of Natural Baby life. I have 11 years of parenting experience raising 4 children! I'm passionate about doing whatever it takes to raise a happy and healthy baby! Find out more about me here.

Trying to conceive is simultaneously terrifying and exciting, and also surprisingly complex. Everyone you know probably has a trick or method that they swear by, and it can be hard to discern science...

It is often suggested that new parents buy multiple types of baby bottles before their newborn arrives. With varying shapes, sizes, and flow rates, many babies have strong preferences when it comes...