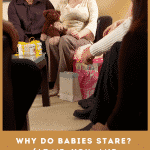 In years past, men weren’t nearly as involved in the raising of their children as they are today. These days, birthing classes are much more detailed than “breathe breathe push,” fathers help to design and implement the perfect birth plan, and are generally more likely to be active participants in parenthood, both before and after the birth. But are they welcome at baby showers, or is that still mom’s party?

Traditionally, men are not invited and do not normally attend baby showers. More recently, some couples choose to open up the baby shower to men or host a separate event for men such as a diaper or wipes party. Ultimately, the decision is up to the parents about who should attend what.

The final determination as to whether men should attend a baby shower is a personal one, but keep reading for some general information and important questions to ask yourself before making the decision. Remember that no matter what you decide, the most important thing is for the mother to be happy with the choice!

Are baby showers only for ladies?

Baby showers are traditionally a time for a soon-to-be mother’s female friends and family to gather around, drink tea and eat tiny sandwiches, and, as the name suggests, shower the mother with gifts. Depending on where you live, these gifts may be traditionally more for the mother than the child, although these days they tend to be specifically baby-related.

Baby showers are normally hosted by a female relative, such an aunt or cousin, or a close female friend, and were only open to women until recently. Conservative or traditional hosts may still choose not to invite men, either out of tradition or the attendees’ own comfort level.

With that being said, there are many different variations of the traditional baby shower these days and it’s up to the parents to decide how they want to set everything up.

Let’s dive into the details.

What about co-ed baby showers

With the father’s responsibilities in the family shifting in the last generation to be more equal and involved in all facets of life, men have taken on a more active role in caring for babies and young children.

As the role of fathers has shifted to be more aware of the occasional hardships of child-rearing, guys have also become more interested in being included in the fun parts as well, including attending baby showers.

Many people now choose to invite close male family members and the husbands of the women who are attending, as well as single guy friends. A good rule to keep in mind is that if the mother is welcoming and the father is interested in attending the shower, it is likely that their guy friends will be similarly interested, especially if they are family friends or have children of their own.

Who usually goes to baby showers?

As with most things, the answer to this depends.

In the past, mothers were typically given a single shower which was attended by all-female family members and friends. Recently, however, she may be treated to a shower for each facet of her life: family, friends, work, church, etc. Each of these showers may have a completely different set of invitees.

A work shower, for example, may be welcoming to both women and men, but the guest list may be limited to people of a similar position or department. It is unlikely that baby shower topics will veer into any conversations that would potentially make anyone uncomfortable because of the nature of work relationships, especially if the party takes place in the breakroom or during a shared lunch break.

A baby shower thrown by friends for friends is increasingly likely to be co-ed. This is especially true if the many of the couples’ friends are already parents. Unlike work or family relationships, friends are likely to be closer in age and more similarly-minded regarding men’s attendance at baby showers.

A family baby shower, on the other hand, is most likely to be attended across a clear generational divide, with older men not attending.

For our first baby shower, we were happy to invite both guys and girls but drew the line at our grandfathers because we felt the invitation would be more confusing to them than welcoming. The men around our age were happy to be invited, but we did run into some confusion with their parents. On the day of the shower, an uncle tried to make plans with an invited cousin because it had not occurred to him that he was also invited despite his name being on the invitation envelope. The cousin’s response, for what it’s worth, was, “You know I go where the food is.”

In years past, there was a taboo involving the discussion of pregnancy and “the gory details” of childbirth in public, particularly in mixed company. In that case, a gendered baby shower allowed for the gifting of items that might have been considered awkward or personal (a breast pump or nipple ointment, for example). It also created a private time for the sharing of stories, tips, and advice that might not have been considered appropriate in a more public setting.

While men (and women, especially those who do not yet have children) may still be squeamish at some of these topics, it is no longer a barrier to entry.

If the mother and father are comfortable inviting men to the shower, go ahead! If nothing else, the invitee always has the option of refusing if he does not feel comfortable attending.

Do husbands or dads go to baby showers

This is a pretty common question.

The soon-to-be father is typically not invited to the baby shower as is it has traditionally been “mom’s day.” That being said, many mothers want to share the time with their partners and welcome the father’s involvement, especially if they believe the celebration is more about the baby than themselves.

Hopefully, the new parents will be in agreement on whether or not the father will attend the baby shower, but both parties should be comfortable with whether or not the event will be co-ed. If dad does attend, it should be expected that other men, including his own friends and male family members, will also be invited.

What do guys do during a baby shower?

If attending a baby shower, the guys do the same thing that everyone else does: play games, eat snacks, and celebrate the new parents and upcoming baby.

Just like the more experienced mothers who are in attendance are likely giving tips on childbirth and the unexpected changes of having a newborn in the house, attending fathers will have advice for the new father and the couple as well.

It can also be a great place for younger guys and married men who may not have been involved with the details of pregnancy to become more comfortable with the experience.

What about a men-only baby shower?

Recently, a baby shower hosted for the soon-to-be father by his guy friends has started to gain popularity. It is not an exact equivalent, sometimes being more akin to the relationship between a bachelor’s party to a bridal shower than the actual bachelorette party, but the intention is comparable.

Often equal parts a sardonic farewell to the freedom of being a couple rather than a three (or more) person family, these man showers can range from laid back beer-and-presents hangouts to dad-centric games (diaper in the dark, anyone?) to full-on guys’ trip weekends.

Just like the baby shower can sometimes feel like the last time mom is the center of attention, sometimes dad needs a pre-baby break too. Even though he may not be personally growing the upcoming bundle of joy, he is responsible for keeping mom comfortable and happy – and that’s a big job.