As parents, we are constantly worried about our babies and it will probably never stop. I’m not ashamed! I’m definitely not the only one that has checked on the baby a million times to make sure that he is sleeping, especially just after we’re home from the hospital. To help calm at least the breathing-related anxiety, there are products available that are meant to alert parents if and when their child stops breathing. Today, we’ll take a look at one of those products with our Snuza Hero baby movement monitor review!

Overall, the Snuza Hero is an affordable, reliable baby movement monitor that can give peace of mind to parents. It is incredibly portable and easy to use, but it suffers from occasional false alarms and battery changes.

In our experience, we’ve loved this device, but others may not. Let’s break down the features, pros, and cons as well as a few tips to get you started!

Who is the Snuza Hero for?

As we mentioned, the Snuza Hero (might also include the SE label) was intended to help ease the worry of parents while their baby is asleep by monitoring her breathing. It is meant to be an all-in-one solution that can be used at home or taken on the go as there are no wires or extra pieces to worry about.

Based out of South Africa, Snuza’s company vision is to provide technology that can speak for babies that are alone and unable to breathe so that their parents can take action immediately. They have only been around since 2007, but they brought the world’s first portable baby breathing monitor to market.

How much is it?

The Snuza Hero is priced on the low end of the spectrum when it comes to other baby movement monitors that range in price from around $99 up to around $250.

You’ll find it available at most retailers for around $100. If you want, check it out the latest 2019 version here (for latest reviews and to buy on Amazon). There is a new color available! All in all, we have not personally regretted our purchase one bit. In our opinion, peace of mind was worth every bit of the purchase price. I think you will agree as well.

How does the Snuza Hero work?

This device is extremely simple to use. Like, so simple you really don’t need the instructions. I’ll give them to you anyway, though!

What are the Snuza Hero Instructions?

What is the alarm feature?

From that point, you will just let the device do its thing. Every time your baby’s belly moves from taking a breath, the device will record it and reset its internal timer. If your baby seems to have stopped moving (breathing) then the device will alert in the following ways:

Basically, the goal of the Snuza Hero is to only alert if there is a serious problem. It’s interesting that it will first try to rouse the baby in case she is in especially deep sleep or maybe the sensor just stopped making contact with the skin. Since loud alarms can scare sleeping babies, it builds in this buffer to soften the blow. 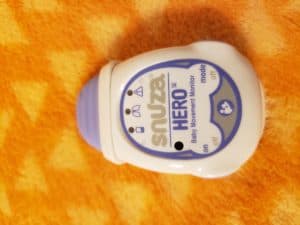 How do you change the Snuza Hero battery?

The Snuza Hero should come with a battery pre-installed along with a few extras as well. In our particular experience, the original battery lasted for at least a couple of months of use and I think we changed it one time before we stopped using the device as our son got older.

Changing the battery in a Snuza Hero is a simple process that just involves using a tiny screwdriver to open the back cover. At that point, simple replace the old battery with a new CR2-style battery. Be sure that the battery is facing the same direction as the original or it will not work.

What are the Pros?

What are the Cons?

We went looking for some kind of movement monitor to put on our son shortly after he was born because we had a hard time getting him to sleep outside of our bed. In the beginning, he seemed to nearly always want to breastfeed and we weren’t able to get him sleeping in his bassinet away from us. We were scared about letting him co-sleep in our bed but figured with some proper preparation and a baby breathing monitor we could keep him safe.

For us, the Snuza Hero worked really well for our purposes. It became part of our bedtime routine to bathe the baby, lotion him down, and clip the device onto his diaper before we put the pajamas on. The device worked as advertised, but we definitely got some of the false alarms noted in purchaser reviews. It was never often enough to annoy us too badly, but they were a thing we had to deal with from time to time. It seemed like in the beginning, when he wasn’t moving a lot, that the alarms were less frequent. As he got older and moved around more though we had more issues. By that point, however, we stopped using the alarm every night and eventually stopped using it altogether once we felt confident that he could move around better on his own.

The unit we received also had a working battery and, so far, we haven’t had to change it yet after several months of use. Of course, your mileage may vary!

Overall, the Snuza Hero monitor has been a solid piece of kit for our family. It was relatively cheap and got the job done without being overly complicated. We enjoyed the fact that we could easily take it with us on trips and it has proven to be pretty durable during the past 7 months.

Do you use any baby movement monitors with your little one? What has your experience been like? Let us know in the comments below!

Parents often spend hours creating the perfect registry prior to both a baby shower and the birth of their newborn. So what are parents to do when the items they thought they so desperately wanted...

Continue Reading
link to Is Your Toddler Mean to the Dog? (And How To Deal With It!)

Young children typically love animals but they may not always know how to treat them. Toddlers especially can be rough with pets and sometimes they might even intentionally hurt an animal. If your...