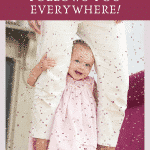 Our children love us to pieces. Nobody means more to them than you do. They feel secure with you and they love knowing you will always be there for them. They show you they love you and that they feel safe with you in many different ways, whether you like them or not.

Generally, the main reason your toddler follows you around everywhere is that they are anxious. Anxiety comes in different forms and this is one of them.

Our children love us to pieces. Nobody means more to them than you do. They feel secure with you and they love knowing you will always be there for them. They show you they love you and that they feel safe with you in many different ways, whether you like them or not.

Unfortunately, that sometimes means that our wonderful toddlers insist on being underfoot at all times! While adorable and truly beautiful, it can be overwhelming and hard to deal with at times. First, let’s check through the stages and see how toddlers are developing, in general. Then, we’ll go through some common issues or troubles that many parents face when it comes to toddlers following them here, there, and everywhere!

Why is my Toddler so Clingy?

“Pick me up!” and “don’t let go!” are two phrases you may hear from your child very often. It’s going to be repetitive and quite frankly, annoying if that’s all you hear every second of your day. This is very natural. This means that you have done a great job with your child and they feel safe with you.

When things may seem scary or unpredictable for children, they turn to you and are essentially asking you for extra love and support to get them through it.

In the long-term, your toddler is using you as a bridge or crutch against the outside world. Over time, he will become more confident that he can interact with the world without your constant support. In the short-term, you must encourage your child, allow him to come to you for safety, and slowly build his confidence.

My toddler keeps clinging to my leg

Sometimes a child will cling to your legs. This is the same behavior that children display when they grab a favorite stuffed animal or blanket. Those items give them comfort because they are familiar.

When they do this, don’t push them away. If you do that, it may give them the implication that you are no longer their safe person. You should also never sneak away when they aren’t looking. This may teach them that they can’t trust you, further increasing their clinginess, as strange as it sounds.

If the leg clinging, specifically, is causing you trouble because you can’t move around the house or you have to be available to take care of other siblings, try to get your toddler to simply place one hand on your leg or hold on to your pants. This will allow you to maneuver more easily and help to break the habit over time.

My toddler is always asking to be picked up

What if they Start Screaming?

If your child begins to scream because you won’t pick them up, do not give in. They need to learn that negative behavior will not result in positive action. You should also step away so you don’t become part of the tantrum. Let them throw their fit, but stay nearby to ensure they are safe.

Additionally, do not hug or cuddle them while they are having their tantrum. Only afterward should you give hugs and kisses, once they are calm.

According to Steven Meyers, a psychology professor at Roosevelt University in Illinois, “Clinginess is an instinctual response to perceived threat and anxiety. In evolutionary terms, offspring of all species are more likely to survive if they stay close to their parents for protection when danger is imminent,”

Now, it’s normal for a child to want to be with you. It’s even normal for them to have a little bit of anxiety when being dropped off somewhere, like at school. It can even cause a mild temper tantrum.  However, sometimes there’s more to it, such as a separation anxiety disorder.

Separation anxiety is a very common reason why your toddler will follow you around everywhere. Kids will go through phases of clinginess. They may be afraid of unfamiliar places or people.

Separation anxiety disorder is something a child will go through when they feel nervous or fearful when they aren’t near a loved one, such as their parent. This disorder can also be the culprit of headaches or stomachs. So when your child says they have a tummy ache as soon as you go to leave them, this can be an indication of separation anxiety.

Some concerning symptoms of separation anxiety disorder can present themselves as the following:

Several contributing factors can cause separation anxiety to show its ugly face.

The main reason is due to an overprotective parent.

The child may not actually have a disease, they may just be so attached to the parent due to the parent’s overprotective nature that they just don’t want to be away from them.

Another reason is due to a stressful event that may have traumatized the child. This could be the death of somebody close to them, the death of a pet, a stay in the hospital, or a sudden change in their environment such as moving to a new home or school.

How to Appreciate Your Toddler’s Attention

Your child may be a constant pain in your behind with their constant clinginess, but you should embrace it while you still can. There will be a time when your child won’t want anything to do with you.

In fact, it seems like just the other day that my twin girls would cling to my legs (one on each) and love nothing more than to hold on to me while I was working, walking, or anything, really. Over time, that behavior faded away and now I can barely get a hug from my 10-year-olds!

Here are a few important points about appreciating your child’s attention and living more in the moment.

You’re Going to Miss It

You’re going to miss their clinginess once they are more independent. After their fears and worries go away, they won’t need to cling to you anymore. When this happens, you may be overwhelmed with sadness, but it’s okay. This means they are growing up and they are learning to cope on their own.

Life has a funny way of overwhelming us with things in a way that, at the moment, makes them seem painful and irritating. It’s only after these things are gone that we realize it wasn’t so bad and we might even yearn for those feelings of being overwhelmed again, if only for a brief period.

When your toddler is being clingy, they may simply be telling you they love you. As much as they want to be independent, they also want to cuddle with you and be comforted. When they plop their little tushies into your lap, they are simply saying they love you and they feel safe.

Enjoy this, it won’t last forever.

When you show a child love and affection, they will learn how to give affection. If you constantly ignore them and their pleas for affection, they won’t learn how to be affectionate. Studies have shown that physical contact between babies and their parents can have an effect on the chemicals inside your child’s brain. Oxytocin, one of the core brain chemicals, is released in both the parents and children whenever one performs a loving act towards the other.

In this way, showing love will cause your toddler to show more love to you and vice versa.

With this in mind, I should point out that a lack of affection can cause real problems because the lack of chemical exchange impacts the brain’s development. Case in point, this particular study shows brain scans that were done on two 3-year-old children. One was given affection and the other had suffered from neglect over a longer period of time. In this case, it images show that the child who received more affection had a larger brain than the child that was neglected.

Neurologists say that this evidence shows that the way children are treated over their early years is vital to their emotional development. It also may determine the size of their brains.

How to Deal With an Extremely Attached Toddler

It may seem like it will never end or that you can’t do anything about it. Fortunately, there is a light at the end of the tunnel. Here are a few ways you can reduce your child’s clinginess:

It seems counterproductive to show them the attention they are constantly seeking, but they still need to know you love them while you are teaching them how to be independent. It will not hurt our feelings knowing we are something safe they can always come back to.

You can work on this with your toddler by giving them a loving compliment, hug, or kiss when they seem clingy. Try to redirect their clinginess into those same displays of affection that are easier to manage.

Create a Supportive Environment for Play and Independence

Set up your home into play zones that encourage independence and keep them occupied. You should have a messy zone with tactical and sensory play, a quiet zone with books, pillows, blankets, etc., and a play zone. The play zone helps their concentration, imagination, and skills. They can get lost for hours in their imaginary world.

Don’t tell them to go play, rather, show them. Provide them with space they need to be independent. Then, let them explore their interests.

Give Yourself a Break

It’s okay to take a break. Ask a friend or a relative to give you a break from your child. If you stay and continue to pull away from your child, their clinginess will only get worse. Take a break and go back to them when you have better energy.

When they sense that you are going to be a true secure attachment figure, they will be more willing to go and explore on their own. They won’t feel such an urge to cling to you anymore because they won’t fear you are pulling away from them.

link to Are Nursing Bras, Tops or Clothes Necessary? (Plus How To Save!)

Choosing to breastfeed your baby is a great way to provide nutrition and health benefits to your baby but you might struggle to decide whether or not you need special nursing clothes, tops, or bras...

It’s common for parents to rave about the sweet smell of their little bundle of joy but there are times that a baby just plain stinks. What do you do if your baby's armpit smells funky instead of...