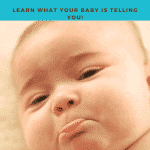 I don’t know about you, but when my baby was born, I simply could not take my eyes off of him. I was completely exhausted all the time, but I wanted to remember every moment because, as everyone kept telling me, “they grow up so fast.” As I tickled his little feet, let him hold my finger with his tiny hands, and tried to memorize his every expression, I couldn’t help but wonder what he was thinking.

Newborn babies will often frown, pout, and furrow their brows involuntarily to show that they are hungry, sleepy, or uncomfortable in some way. As parents learn the more subtle cues that their baby displays it becomes easier to determine what is causing the issue and fix it.

Admittedly, I never found out exactly what was going on behind those big eyes, but I did learn what some of his expressions meant and what he was trying to tell me before he could communicate through words or even gestures.

The meaning behind baby facial expressions

You’ve probably read that communication is 55% body language, 38% tone, and 7% the words you use. Now imagine that the person you are communicating with doesn’t have any words, and doesn’t have control over most of his tiny body – oh, and you’re not always sure what the tone means. That’s what trying to communicate with a baby is like.

Fortunately for us as parents, babies also tend not to have overly complex thoughts so it is often possible to narrow down what your baby’s facial expression means by taking into account any sounds and movements he might be making as well as the situation as a whole.

Unsurprisingly since he uses his mouth for the most important part of his day – eating – your baby is aware of and in control of his lips before almost any other part of his body. That means that, unlike many other involuntary actions, the expressions he makes with his mouth are purposeful, and probably very similar to your own in related circumstances.

Why do babies frown?

When my son was born, I thought he must be a very anxious baby because he was always frowning and clasping his hands together (I even called them his “worry hands”). He never sucked his thumb or a pacifier, so that this was his version of self-soothing and his frown was just his way of telling me that he was getting tired, but not yet frustrated or angry about it.

What else could your baby’s frown mean?

If your baby’s frown is accompanied by silence and looking away, it may indicate that he’s bored or generally displeased with the current situation. His frown is a sign that he’s disengaging from the events going on around him, sort of like if get you bored and zone out but without your adult ability to regulate your attention.

On the other hand, it’s possible his frown means nothing at all. Some studies suggest that babies don’t smile during their first several weeks of life simply because they have not yet learned how to be happy. Basically, your baby’s first weeks are filled with many lower-level thoughts like “I am hungry” or “I am uncomfortable,” rather than the slightly more advanced “I am sad because I am hungry” or “I am happy because I am no longer uncomfortable.”

What does it mean when babies pout?

Unlike when he’s actually crying, if your baby is pouting it means there is still time to calm him down and fix whatever the perceived problem is. While a crying fit is usually accompanied by your new baby squeezing his eyes shut as tightly as possible and screaming, a pout is almost always silent while he tries to make eye contact with you.

Unfortunately, you may not be able to tell what the pout means until the tears start, but if your newborn is pouting, he is almost certainly trying to tell you that he is either uncomfortable, hungry, or tired. Your best bet is to start with the potential issue that it had been the longest since it was last addressed. For example, if he was fed and then took a nap, his most pressing concern is likely to be a wet diaper.

Why do babies poke their lip out?

When your baby pokes his lip out, especially if he is also sticking out his tongue, it probably means he is hungry. The motion is part of his breastfeeding instinct, and is there to keep him from trying to take in anything other than the nipple (or bottle) before he’s ready. Technically, it is called an extrusion reflex, but I called it my son’s “milky mouth” because it always looked like he was asking for something to drink.

Why do babies furrow their brow?

A furrowed brow is one of the most variable expressions you are likely to see on your newborn’s face. To figure out what’s going on in your little guy’s head, you will need to pay close attention to what else he’s doing.

When will my baby smile?

One of the most wonderful milestones in your baby’s development is when he first starts to smile at you, but when is it a real smile and not just gas?

Some studies suggest that babies don’t smile because they don’t yet feel happiness, either because they cannot remember being happy (so-called infantile amnesia, but it is really more about the idea that they are not yet creating memories than they are forgetting things) or because their cognitive development has not yet developed to the point where they recognize the feeling.

Although your baby can demonstrate contentment shortly after birth, he will not start smiling at you for several weeks. At six to eight weeks, your baby will start gracing you with social smiles – smiles that are reflections of your smile being directed at him.

link to Can I Bleach Baby Clothes? (With Natural Whitening Alternatives)

Between the blowouts and spit-ups, parents often find themselves with mountains of laundry with stains that need to be treated. Bleach is a powerful disinfectant and stain remover, but is it safe to...

We all know that reading to our children is one of the most beneficial things we can do for them. But what happens if your child doesn’t enjoy books? If your baby hates when you read to him then...