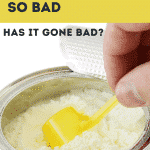 It’s important that we, as parents, make sure that our baby gets fed. Sometimes that means they will be breastfed, sometimes formula-fed, and other times it may just be a combination of the two. Whichever way your baby gets fed, it’s just important that their diet meets their developmental needs. Breastmilk contains a lot of vital nutrients that babies need in their early life, and baby formula is created to closely mimic the same nutritional value that breastmilk provides.

Baby formula is loaded with the vitamins and minerals that your baby needs, but, while it is meant to mimic the nutritional value of breastmilk, that is where the comparison ends. One of the biggest complaints parents have is that fresh formula smells like it has gone bad, although typically they are smelling specific elements of the formula itself.

Read on as we discuss just why the formula smells, what the various odors can mean, and how you will know if the formula has actually gone bad.

Why does my baby’s formula smell bad

It’s common for most formula brands to have a smell to them.

While baby formula is supposed to provide very similar nutrients as breastmilk does for babies, the smell will differ. Since the vitamins and minerals are added to the formula, they will cause a particular smell. And since each brand has its own specific ingredient list, the way each smells will vary.

While some brands may smell like metal or cheese or even fish, you will want to make sure that the formula doesn’t smell off and doesn’t look like the ingredients have separated. These are indicators that the formula has gone bad.

Once you open a canister of powdered formula, you want to use it all within one month. Once the formula has been prepared, you will need to use that within 2 hours of opening it. If you don’t plan on using it immediately, you can put it in the refrigerator and use it within 24 hours.

Many parents find that Similac formula doesn’t smell very good. And that’s pretty normal. Because minerals are added to the formula, specifically iron, they cause the formula to smell bad.

Similar to Similac, Enfamil formula is also on the smelly formula list. A lot of parents point out that the hypoallergenic formula smells even worse than the regular formula.

How should baby formula smell

Because formula contains a lot of vitamins and minerals for baby, it causes the formula to smell differently than breastmilk does.

Baby formula may have an odor, which can vary depending on the brand, but in general, it should never smell sour.

Also, if you notice that a canister smells different than normal, that’s an indication that the formula has gone bad.

Should my baby’s formula smell bad

Most formulas don’t really smell good. But, there’s a difference between the formula smelling bad and the formula actually going bad.

The smell of formula can vary, ranging from metal to fish, cheese, iron, poop, dog food, and a sour odor. If you’re ever in doubt about the way the formula smells, or it just doesn’t smell like it normally does, it’s a safe bet to go ahead and throw it out.

If the formula is spoiled, the smell will be different.

Chances are you’re familiar with the way your baby’s formula typically smells, even if you don’t like it. If either the powdered formula or the final bottle doesn’t smell like you know it should, it may be spoiled and you should err on the side of caution.

Also, if the formula is spoiled, the ingredients start to separate so you will notice a difference in the consistency of it.

Powdered formula will smell different when it goes bad.

When powdered formula starts to go bad, it will break down and start to separate. This should be visually apparent, but you’ll definitely be able to smell the change.

Most formula brands should be used within 1 month of opening the container, but you should check the label to be sure. It can help to write the date you opened the container on the lid so you don’t forget.

If prepared formula has gone bad, it will smell off.

If you notice that baby doesn’t want to drink the bottle or starts throwing up after drinking the bottle, that could be a sign that the formula is bad. If you leave the prepared formula out at room temperature, it can spoil.

While it’s pretty common for formula to have a less than appealing smell, some are certainly better than others, at least according to some parents.

When looking at parents’ opinions of formula, a lot of people seem to favor the gentler formulas such as Enfamil Gentlease and Similac Sensitive, noting that the smell isn’t as strong as it is with the other formulas.

I'm the dad in charge of Natural Baby life. I have 11 years of parenting experience raising 4 children! I'm passionate about doing whatever it takes to raise a happy and healthy baby! Find out more about me here.

Trying to conceive is simultaneously terrifying and exciting, and also surprisingly complex. Everyone you know probably has a trick or method that they swear by, and it can be hard to discern science...

It is often suggested that new parents buy multiple types of baby bottles before their newborn arrives. With varying shapes, sizes, and flow rates, many babies have strong preferences when it comes...