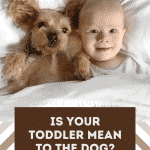 Young children typically love animals but they may not always know how to treat them. Toddlers especially can be rough with pets and sometimes they might even intentionally hurt an animal. If your toddler is ever mean to your dog, you might wonder what you can do to deal with their behavior.

So, what do you do if your toddler is mean to the dog? Most toddlers are mean to animals like dogs because they don’t understand that they are living creatures with feelings and instead see them as a toy to play with. If your toddler is being mean to the dog then immediately address the behavior, explain they are hurting the dog, and show them how to play nicely.

Children being cruel to animals can be a red flag in some cases. But before you become concerned, it’s important to stop and think through the situation. Keep reading to hear some insight as to why toddlers are sometimes mean to animals and what you can do to stop the behavior.

Why is my toddler mean to the dog?

There are plenty of reasons why your toddler might be mean to your dog and not all of them are a cause for concern.

More often than not, toddlers display mean behaviors because they don’t yet understand that animals have feelings and they haven’t been taught the proper way to treat them. Aggression in a toddler is actually pretty common, and temper tantrums that include behavior such as hitting, biting, and scratching typically start around this age.

Much like every other area of your child’s life, it’s up to you as the parent to be the teacher and model positive behavior for your child. If your toddler is intentionally hurting or being rough with the dog, it’s possible they are jealous of the attention the dog is getting. If the dog is a new addition to your family, your toddler also may be overstimulated because playing with the dog is an exciting and new experience.

What does it mean if a child is cruel to animals?

There are certain instances when it may be a real concern if a child is cruel to an animal, but most of the time there’s another reason behind it. What you need to look out for is the cause of your child’s behavior and see if you can intervene to correct it.

In some cases, children being cruel to animals can be a sign of future violent behavior. According to Psychology Today, if a child under age six is hurting an animal, they are considered to be in a phase called “The Experimenter.”

This means that if a preschool child is mean or cruel to a pet, they may be in a developmental phase where they lack the ability and maturity to understand that animals have feelings like humans do. This is seen most often when the dog is a new pet, and the child hasn’t had much experience dealing with animals.

If an older child is cruel to animals, or a child who understands it’s not okay but continues to hurt the animal, this may be a cause for concern. If you have any concerns about your child’s behavior, it’s best to talk with your pediatrician or a child psychologist.

How do I stop my toddler from hurting my dog?

If your child is displaying aggressive behavior towards your dog, you are likely wondering how to stop them. Just like any other negative behavior your child displays, it’s important to model the correct behavior and use reinforcement to encourage your child to do the right thing.

It’s common for children to imitate behavior they see, even if it’s not in the home. Your child may imitate the behavior they see on TV, in a movie, or from another family. Aside from modeling, the best thing we can do is find out where your child is learning the behavior and use positive reinforcement to encourage them to change the way they’re acting.

How to stop a child from hitting a dog

If you would like to stop your child from hitting the dog, show them what they should do instead of hitting.

A positive alternative to hitting may be petting the dog in a gentle manner. Your child may be trying to play with the dog but may not realize they’re actually hurting them. Ask your child to use “gentle hands” or “soft hands” when they begin to hit the dog.

Like most undesirable toddler behaviors, hitting is one way that toddlers test their limits to see what they can get away with. It’s important to show your toddler that this behavior is not acceptable. If necessary, you may need to remove your child from the situation by putting the dog in another room. Let them know they will need to calm down and be gentle in order to play with the dog.

What if your toddler is throwing things at the dog

The ability to throw objects is an important skill for your toddler to learn and requires well-developed fine motor skills. However, aggressive throwing can become an issue. The best way to stop your toddler from throwing objects at your dog is to teach them what they can throw.

Instead of throwing things at the dog, show your toddler how to play fetch with the dog. Your child may be throwing things because they want to play with the dog but they may not understand the dog doesn’t want to play. It’s also important to show your toddler how to read the dog’s reaction. Help them to understand that if your dog runs away or hides after your child does something, that means they probably hurt the dog.

Your toddler also might throw things if they’re trying to get the dog’s attention. Teach them the proper way to call your dog without using aggressive behavior.

What if your toddler is aggressive towards the dog

If your child is being aggressive towards your dog, try to find the root of their aggression.

Is there a new dog in the home that’s getting a lot of attention?

Are they upset because they want to play with the dog and they don’t understand the dog doesn’t want to play?

Simply telling your child to stop may not address the actual issue behind their behavior.

Whether your toddler is two or four, they’re still learning how to express themselves in a healthy way and deal with their frustration properly. Toddlers often have big feelings but don’t always know how to deal with them. Remind your child that it’s okay to feel angry, sad, or jealous, but we have to be careful how we deal with our emotions. It also might be helpful to suggest they “use their words” not their hands, feet, or other objects.

My 2-year-old is mean to the dog

Toddlers at this age typically show the most aggression because they have yet to learn how to express their feelings. Their lack of self-control at 2-years-old often causes frequent temper tantrums and may cause a tense relationship between your toddler and your dog.

At this age, it’s harder to reason with and explain things to your toddler. The best tool you can use at this phase is modeling. When your 2-year-old is mean to the dog, show them how to be gentle. Pet the dog nicely and show your toddler how to use gentle hands. Then, hold your child’s hand and guide their hand to pet the dog gently.

Showing an alternative behavior and telling them what they should do, is often more effective than just telling them what not to do. If you don’t think they’re ready to play or pet the dog gently, have them practice on a stuffed animal.

My 3-year-old is mean to the dog

Toddlers of this age typically display aggressive behaviors when they are overstimulated or overwhelmed.

Your child may become overstimulated when playing with the dog because overstimulation can happen in a new or exciting situation. Toddlers also may act aggressively when they feel strong emotions such as anger or jealousy. Even though 3-year-olds are more capable of listening to reasoning than 2-year-olds, they still struggle with self-control and dealing with their emotions.

Situations like this are a great time to encourage empathy in your toddler. Ask them how they would feel if someone was mean to them. Let them know they can only play with the dog if they are gentle.

When your 3-year-old is mean to the dog, don’t assume they know exactly what they did wrong. Even if they were being aggressive, they may have thought they were just playing with the dog. Try to calmly explain to them how to play with the dog instead of immediately punishing them for their behavior.

My 4-year-old is mean to the dog

With a 4-year-old, you may be able to explain the consequences of their behavior. A child who may be trying to play with or love the dog may not realize they’re actually hurting them. This is a good age to teach your child how to read the dog’s reaction and body language.

If your toddler doesn’t understand when they’re hurting the dog, show them the difference in the dog’s reaction when they are gentle and when they are rough. You might say “see how his tail is wagging? That means he’s happy” to show how the dog reacts when he is pet gently.

You can also explain to them how the dog might feel when they pull its tail or fur. Helping them understand that the dog can hurt and feel pain just like we can should put an end to their behavior.

Your 4-year-old may continue being mean to the dog even after you’ve explained how the dog feels. Time-outs can be an effective strategy at this age to help your toddler calm down and learn positive behavior. Use time-outs as teachable moments by explaining to your child how they can do better after they have calmed down in time-out.

Parents often spend hours creating the perfect registry prior to both a baby shower and the birth of their newborn. So what are parents to do when the items they thought they so desperately wanted...

Continue Reading
link to Do You Need Baby Washcloths? (With Other Alternatives!)

Many parents and caregivers have opted to use baby washcloths for cleaning their babies during bath time. In recent years there has been a spike in online conversation from parenting forums, which...