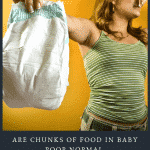 A baby’s poop can tell you a lot about their development and overall health but if you happen to notice some chunks of food in your baby’s poop, is there a problem?

It is completely normal to find chunks of food in your baby’s poop if she is less than one year old because her digestive system has not fully matured and she likely does not chew her food into small enough pieces before swallowing. As your baby grows and becomes more comfortable eating solid foods her poop should return to normal consistency.

Keep reading to learn why some food might be more difficult for your baby to digest, and when to check in with a doctor if you’re worried about your little one’s digestive system.

Is it normal to have chunks of food in baby poop?

Before having a baby, you probably steered well clear of poop. But now you know that a baby’s full diaper can actually tell you a lot about your little one’s overall health.

It’s pretty normal for your baby’s poop to contain small chunks of food. Especially if your baby has just started on solids or finger-foods, it can take a while for their digestive system to adjust. Pay attention to the factors we list below and if you continue to notice undigested food, a pediatrician can screen your baby for potential digestive issues.

Even though it might be startling to open your baby’s diaper and see chunks of food, rest assured that it’s a pretty normal experience!

As your baby hits the 6-month mark and starts eating solid foods, it’s important to remember that he or she is still learning how to eat. Eating is a complicated bodily process, and a baby’s digestive system has a lot to learn over the first year or so of their life. Even if your kiddo’s digestive tract is completely matured, they’re probably still missing out on some crucial, food-eating hardware: teeth.

Don’t forget that there are many variables when it comes to your baby’s digestion of solid foods. Here are the most important factors:

Babies don’t usually have many teeth when they start on solids.

Teeth are an important part of the digestive process for babies because they break the food down into particles small enough to be digested easily. Without this initial step, it’s more likely that chunks of food will pass through your little one’s digestive system and end up in their diaper. As your child’s teeth continue to come in and they become more efficient and practiced at chewing their food, you’ll probably notice fewer chunks of food in their poop.

What are the chunks in baby poop?

If you do notice strange chunks in your baby’s poop, it’s most likely undigested food particles. Some foods are especially high in fiber, which makes it hard for the body to digest.

Common baby foods that are high in fiber can include:

Fiber is an important part of a healthy diet, so even if you notice some chunks in your baby’s food, you’ll want to continue to feed them high-fiber foods. As your little one’s digestive system continues to mature, you should notice fewer chunky poops.

Babies don’t have a full set of teeth when they first begin eating solids. Chewing food into smaller pieces makes it easier for the digestive enzymes to break down the remaining food particles. As your baby’s teeth come in and they learn to chew more thoroughly, more of their food will be completely digested.

Another important factor to consider is how often your baby poops.

The more time food has to sit in the digestive tract, the more digestive enzymes are able to break down the food particles. Babies poop seemingly all the time, which means that food doesn’t sit in their colon for very long. Because of the quick turnaround time, you’re more likely to see chunks of food in a baby’s poop.

Adults have a much longer turnaround time between bowel movements, so our stools are more likely to be completely digested.

Before your baby starts on solids, you might already be seeing undigested food in their diapers, especially if your baby is breastfed.

Breastfed babies generally have mustard-yellow poops that are often described as “seedy.” This “seedy” texture is actually caused by little bits of undigested milk fat, which is completely normal.  If you’re seeing big white chunks in your baby’s poop, though, it’s probably not milk.

The whiteish color can actually be caused by a potentially dangerous liver problem, so if it continues for several consecutive bowel movements, you’ll want to check in with your child’s pediatrician ASAP!

If your baby is formula-fed, their poop color and texture can vary widely without any cause for concern. Sometimes, formula-fed diapers can even end up looking just as “seedy” as those produced by breastmilk.

If you’re seeing small bits of undigested formula in your baby’s diaper, it’s not a problem. It just means that your baby isn’t completely digesting all the formula they’re fed, and the extra is coming out the other side.

Of course, if your baby isn’t gaining the right amount of weight or seems lethargic, check in with a pediatrician.

Corn is one of the most common culprits for undigested food found in poop.

Even adult bodies can have a difficult time digesting corn completely! Corn has an outer shell made of cellulose, which your body can’t actually digest. The human body relies on specific enzymes to metabolize the chemical compounds present in food, and without the right enzymes, there are some chemicals that your body simply can’t process.

Even though you and your baby will never be able to digest the cellulose in the outer shell of corn kernels, that doesn’t mean that corn is a bad thing to eat. Your body can digest the food components inside the corn kernel, and those components include vitamins and minerals that help fuel your body. If you see what look like whole kernels of corn in your baby’s diaper, it’s probably just the outer shell of the corn that’s impossible to digest.

Your baby still got plenty of nutritional content from the inside of the corn, and the cellulose passed straight through their digestive system and out the other end.

Even though bananas are easy to digest, you might still find chunks of banana in your little one’s diaper.

The most likely culprit for big chunks is that stubborn lack of teeth that makes it extra tricky for your baby to get foods down to a manageable size. Bananas are dense and chock-full of good stuff, which means that even a small piece takes some time to digest completely.

Bananas can also cause small black ‘threads’ to show up in your baby’s poop. These threads are just the center of the banana, and are trickier for the body to process.

Raisins contain a lot of fiber, which means they’re hard for the body to digest.

It’s not unusual for entire raisins to make their way through a baby’s digestive tract and end up completely unscathed in their diaper. Luckily, as your little one’s digestive system matures and slows down a bit, the diaper full of raisins should disappear.

If you notice bits of undigested grapes in your baby’s diaper, it’s probably the grape skins.

Grape skins are extremely fibrous, which makes them particularly difficult for the body to digest. Also, breaking up grape skins without a full set of teeth is pretty much impossible. Doctors recommend waiting until your baby is around 10 months old before giving them grapes.

When you do start, make sure you thinly slice and lightly mash the grapes before giving them to your child. Whole, or even halved grapes, can be a major choking hazard.

Blueberries are very similarly structured to grapes, which means you might end up seeing some blueberry skins in your little one’s diaper.

If your baby swallows a whole blueberry, they might even poop out the entire blueberry, because their digestive system couldn’t get through the blueberry skin in order to digest the center parts. Because whole blueberries can be a choking hazard, cut them into small slices before giving them to your baby.

Slicing the berries will also make them easier to digest!

When to worry about food chunks in baby poop

Even though it can be startling to see chunks of food in your baby’s poop, it’s a pretty normal occurrence. There are, however, some warning signs associated with chunky poops that would warrant a visit with the pediatrician. Call them right away if:

Any of the symptoms mentioned above should be discussed at your child’s next doctor’s appointment. If your baby seems lethargic, has bloody poop, or has diarrhea for more than 24 hours, seek medical attention immediately.