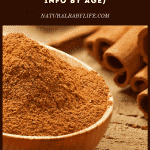 Cinnamon is one of the world’s oldest and most popular spices and was, at a time, as precious as gold. With its spicy sweetness and powerful health benefits, even babies can’t seem to get enough.

Cinnamon is generally safe for babies to eat once they are comfortable eating solid foods, around the age of 6 months. It is not common for babies to have allergies to cinnamon and it is a great way to add flavor and potential health benefits to otherwise bland baby foods such as oatmeal or rice.

Since ancient times, cinnamon has been seen as a strong immune booster inside and out. Let’s delve into more reading to see the effects of this “wonder spice”.

Is cinnamon safe for babies to eat?

Cinnamon is generally considered to be safe when consumed in small quantities in a variety of foods.

Most parents will start to introduce cinnamon and other spices into the diet of their babies as young as 6 months old and, as long as there is no allergic reaction detected, it is safe to use small amounts (less than half a teaspoon) per day in baby food.

There is a debate on whether different types of cinnamon are safer for children than others. The two main types are Ceylon and Cassia. Each is a different type of the same spice and holds different properties.

Ceylon originates from Sri Lanka as far back as 2000 BC and was imported by the ancient Egyptians in the use of embalming mummies. In medieval times, doctors used cinnamon to treat hoarseness, arthritis, sore throat, and general coughing. It could also be used for curing meats because of its antimicrobial properties.

Cassia originates from southern China. It is cheaper and a rougher texture than Ceylon and is used more often around the world in foods.

What are the side effects of cinnamon?

Along with the benefits, there can be some side effects from consuming too much cinnamon.

Cassia cinnamon is said to have larger amounts of coumarin, which is a blood thinner. This can lead to liver damage if too much is consumed. Ceylon or “true” cinnamon contains little to none of coumarin.

However, it would take a lot of cinnamon consumption to cause side effects so normal additions to food should not cause any issues.

Other side effects can develop from the outside or the inside:

What are the potential allergies associated with cinnamon?

Allergies from cinnamon, though rare, can occur especially if there is a compromised immune system or history of allergies in the family history:

Discussing any concerns about allergies with your doctor is important especially with babies because they cannot communicate their issues. If your child is allergic to cinnamon, you have to be very careful to read all labels of food. It can also be found in a lot of other places that you might not suspect such as shampoo, toothpaste, chewing gum, etc. Also, women who are pregnant with a high-risk pregnancy or high risk of miscarriage should avoid cinnamon, as it could be a danger for baby and mother.

Never, ever give cinnamon in its powder form to a baby or child by itself. There was a YouTube challenge a couple of years ago where people would eat a spoonful of cinnamon. Eating cinnamon in this way can cause choking and even death in certain situations.

Side effects can include:

When can babies have cinnamon?

Some studies have suggested that babies can react to certain flavors and spices as early as through the amniotic fluid in the womb.  This creates a “blueprint” of what the baby will probably enjoy in life as they grow.

Taste Buds develop as early as 7-8 weeks in gestation.  Doctors recommend waiting until the baby is at least 6 months old before trying any spices. The aromatic ones, including cinnamon, are the first suggested. In small quantities, it can be added to just about any food your baby loves to eat to enhance their taste buds.

Different cultures also use cinnamon and other aromatic spices to give to their children.

How much cinnamon to add to baby food

Generally, less is more. Babies don’t need a lot of spices in their food, just a taste to get their tongues and minds going. A sprinkle is all you need to add flavor. Some premade baby foods already contain cinnamon as a sweet enhancer ingredient.

As a general rule, babies should have less than half a teaspoon of cinnamon per day.

Can babies have cinnamon in oatmeal?

Cinnamon is a delicious addition to oatmeal, making it warm and healthy. Along with jam, peanut butter, or fruit, it can be the perfect morning food.

Other foods that are good with cinnamon for babies:

Can you put cinnamon in baby formula?

Yes, it is possible to put cinnamon in baby formula. The bigger question is really should you add it to the formula in the first place.

It can also, milk, almond milk, or any other milk alternatives, although, it would be best to check with the pediatrician if you are unsure.

Potential benefits of cinnamon for babies and toddlers

There are many reported benefits of eating cinnamon, regardless of your age. However, many of these benefits are fairly anecdotal and don’t have robust medical studies backing them up.

Still, anecdotes are often true in many ways and it might be better to assume that some of the more incredible claims might not be true but cinnamon is still a tasty and overall healthy spice to use when cooking for both you and your baby!

By the way, benefits can start as early as in the womb from the mother consuming cinnamon. Eating it has been shown to regulate the blood pressure in pregnant women, reducing the risk of preeclampsia which can be a dangerous condition for mother and baby.  Breastfeeding also gives multiple nutrients to the baby because of everything consumed through the breastmilk.  It is said to increase the milk supply and blood flow.

Cinnamon is a powerhouse of health and offers children a variety of immune-boosting benefits:

A study says that eating cinnamon helps regulate blood sugar which will help fight off the onset of Type 2 Diabetes in people who have the stages of prediabetes.  There are statistics that show how Diabetes can increase the complications of the illness.  Adding more cinnamon to your child’s diet, along with sanitization and social distancing, can be another fighter against modern health complications.

The theory is that the spicy flavor and the anti-inflammatory properties of cinnamon soothe the baby’s gums.

Some parents even report giving their children the solid sticks to chew on, which are fairly strong and don’t break off easily.  The soothing taste and feel seems to calm the babies down and offer comfort.  Cinnamon water has also been used in some cases as well.  However, never leave the child unsupervised as with any other food.

Cinnamon is healthy and adds some spicy adventure to food.  Used for thousands of years, this cinnamon is a continuing superfood.  This is in no way a clinical study.  Always check with your doctor before introducing a new food to your child.  Moderation is best and there are many delicious recipes with cinnamon for your little one to try.

Remember, while the benefits are many, too much of any food can be a bad thing, especially with children.  Any allergies or concerns should be discussed with your pediatrician.