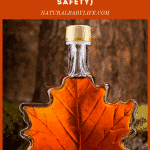 There are many foods that babies can’t eat and it’s difficult to always know what’s safe for your little one and what’s not. Maple syrup is a food that is actually considered to have a lot of health benefits. But you might be wondering, can babies have maple syrup?

Maple syrup should be safe for babies to eat in normal circumstances as the potential for botulism or other food-borne bacteria is very low but some experts recommend waiting until after babies are 12 months old. As with any sugary food, babies of any age should only eat maple syrup in moderation.

Maple syrup can be a great addition to your household, but it’s important to wait until your baby is truly old enough to eat it. Keep reading to find out when your baby will be old enough to have maple syrup and whether it really is beneficial to your child’s health.

When can babies eat maple syrup?

Once a baby hits four months old, it’s possible for them to start eating solid foods. However, some pediatricians recommend waiting until a baby is at least six months old. There are certain signs that your baby might be ready to start solids such as they can hold their head steady without much assistance and they have started to reach for your food while you’re eating. Their individual health also is a factor, so it’s important to talk to your child’s pediatrician if you’re unsure if they’re ready to start solids.

Many parents wonder about foods such as honey or maple syrup since they don’t require chewing or necessarily pose a choking hazard. Honey is not safe for infants under one year old because it can pose a risk of botulism.

Maple syrup doesn’t have the same risk of botulism and other food-borne bacteria because it is boiled throughout the process, however, it’s still not good for infants under one year old to ingest. Maple syrup has a high sugar content and is not necessarily beneficial for infants.

With that being said, there is no real danger to letting your baby try maple syrup once they are comfortable with solid foods and especially after they have reached 12 months.

What age can a baby have pancakes?

If you’re thinking about giving your baby maple syrup, it’s probably to go along with their pancakes.

Pancakes are a pretty soft food that a baby may be able eat once they’re ready for solid foods. If you are going to feed your baby pancakes, make sure you cut them up into small enough bites for your baby to pick up and chew. It’s also important to pay attention to the sugar content in the food you feed your baby. If you make homemade pancakes, you can find a recipe with oats or whole wheat flour in order to make them healthier for your baby.

Once your baby is ready for solid foods, it’s up to you as the parent to decide what they’re ready for and how you would like to start them off. Many parents choose to start their babies off with mashed foods such as bananas or avocados, while others choose to only feed them baby food, which is typically pureed to make it easy for a baby to eat. Some parents also choose to do baby-led weaning, where they are able to start with solid, finger-type foods that they can pick up on their own.

Is maple syrup safe for babies to eat?

Honey is a concern for young children and due to the risk of botulism, honey should not be given to children under one year old. Many parents wonder if the same is true for maple syrup.

Pure maple syrup is taken directly from the sap of a maple tree and because the syrup is boiled, the risk of botulism is very low. This means that it doesn’t have the same potential risks as honey. However, maple syrup may still be a concern because of its sugar content. Even though real maple syrup does have nutritional benefits, it does still have a pretty high sugar content and should only be given to young children in moderation.

Maple syrup likely shouldn’t be given to babies until they’re at least a year old. Once they pass 12 months, their bodies are able to process sugar more efficiently and things like syrup and honey are less of a concern. While there’s nothing wrong with letting your child have something sweet every once in a while, the first year of their life is setting the foundation for what they will eat over the next few years.

Infants under one-year-old certainly don’t need foods with a lot of sugar and likely won’t tell the difference if you leave most sugar and processed foods out of their diet.

Pure maple syrup does in fact have some nutritional benefits such as plenty of antioxidants.

However, it should still be used in moderation, even in adult diets.

Maple syrup, combined with water, is sometimes given as a remedy for constipation in babies. Pure maple syrup is believed to aid in digestion. Maple syrup should only be used to aid digestion in otherwise healthy babies.

If your baby is constantly constipated or there are any other concerning signs, those could be a sign of illness in your baby. In the event of constipation, it’s best to speak with your child’s doctor before trying anything new.

Is maple syrup and regular syrup the same?

There is a huge difference between maple syrup and regular syrup you’ll find in the store.

Regular syrup is often labeled as “maple-flavored syrup” or “pancake syrup” and is not actually maple syrup. Much like any other type of syrup, regular syrup is simply made of sugar and has many additives in it. While pure maple syrup is only made of one ingredient, pancake syrup and other maple-flavored syrups are typically made from high-fructose corn syrup and include several artificial colors and flavors.

As mentioned previously, despite the high sugar content of pure maple syrup, it does have many nutritional benefits and can be great if used in moderation. Regular syrup however is mostly made of artificial ingredients and flavors. Both types of syrup should be used in moderation but if you’re going to choose one, pure maple has more nutritional benefits.

Many people choose to buy regular syrup simply because of the price. Pure maple syrup can be pricey in comparison to artificial syrup. But even with the price difference, it’s worth splurging on the real stuff.

What’s the best maple syrup to buy for a baby?

There is a process by which maple syrup is classified and there are several different classifications such as golden, amber, and dark colors. Although it may not make a difference in health benefits or safety, the classifications of pure maple syrup do affect the flavor.

If you are trying to introduce maple syrup to your baby or toddler, it may be best for you to start with a golden or amber grade. Your little one will likely enjoy the sweeter and milder flavor more. Getting your child used to the flavor of maple syrup instead of processed sugar is a great step towards a healthy diet for your baby.