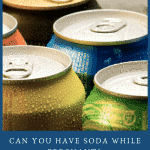 Although you probably know that alcohol is off the table while you’re pregnant, a bubbly soda might not be the best substitute. But how dangerous is the occasional glass of soda? And are there some types of soda that are safer than others?

Even though indulging in soda during pregnancy shouldn’t cause problems for your baby, it might not be doing you or your little one any favors either. Keep reading to find out what the science says about soda consumption, and why it’s best to only drink soda in moderation while pregnant.

Is drinking soda bad when you are pregnant?

While pregnant, you’re completely responsible for the nutritional health of your growing child. The food and drinks you consume not only influence your health, but they can also play a huge role in the health of your little one as well. It takes a lot of energy and nutrients to make a baby, and your body supplies those building blocks.

Because of the nutritional toll that pregnancy can take on a woman’s body, most doctors recommend that pregnant women take prenatal vitamins and focus on eating a healthy diet. A healthy diet during pregnancy includes whole grains, fruits, vegetables, lean proteins, and lots of water. Added sugars, fats, and empty calories can cause nutritional deficiencies and unhealthy weight gain during pregnancy.

Although soda isn’t actively discouraged for consumption during pregnancy by most doctors, it’s not exactly recommended, either. Soda is full of added sugar and empty calories, so it isn’t giving your body much in the way of nutrition. In fact, filling up on empty calories can make you full without providing you with the vitamins and minerals you and your growing baby need to thrive.

Here are some of the main reasons to limit your soda intake while you’re pregnant:

Can I drink cold drinks while pregnant?

At some point, you might have stumbled across the recommendation to avoid all cold drinks while pregnant.

Cold food or drinks are perfectly safe for both you and your growing baby.

This suggestion otherwise originates in Traditional Chinese Medicine (TCM), which claims that cold drinks weaken the body and can shock the system. Although the TCM suggestion to avoid cold drinks applies to all stages of life, it’s considered especially important during pregnancy. Although it’s natural to be worried about the effect of your diet on your baby, there are no scientific studies that indicate cold drinks are detrimental while pregnant.

Why do I crave soda while pregnant?

One of the usual side-effects associated with pregnancy is food cravings. Although the cause of cravings during pregnancy isn’t perfectly understood, many doctors believe cravings are brought on by the hormonal changes that take place during pregnancy. Some cravings are strange (pickles and peanut butter, anyone?) but in general, women tend to have pregnancy cravings for carbohydrates, salty snacks, and sweet foods.

Because a craving for sweet foods is normal, it’s not a surprise that many women crave soda while pregnant. All those added sugars in soda make it a tempting option for satisfying a sweet tooth. Some experts also believe that pregnant women crave dessert-type foods because they’re a special treat. According to that theory, the very fact that you’re not supposed to drink much soda while pregnant might make you crave it even more!

Even though you should limit your soda intake during pregnancy, doctors say there’s nothing wrong with satisfying a craving for soda. Try to enjoy any pregnancy cravings in moderation, though: maybe aim for no more than a glass of soda a day, instead of downing a 2-Liter bottle in one sitting.

Can drinking soda cause miscarriage?

Soda itself hasn’t been linked to an increased risk of miscarriage during pregnancy. Caffeine, however, has been well-documented in its effects on pregnancy.

However, to keep your miscarriage risk at a minimum, it might be best to avoid caffeine throughout the course of your pregnancy.

Soda during third trimester of pregnancy

Throughout pregnancy, the biggest risk factors associated with drinking soda while pregnant are the high sugar content and caffeine levels. In the third trimester of pregnancy, these risk factors can manifest differently than they might in the first two trimesters.

Although the studies have been inconclusive, some reports suggest that large amounts of caffeine consumed in the third trimester can affect babies immediately after birth.

Mothers who consumed more than 500mg of caffeine each day in their third trimester had babies who were more likely to have increased breathing rates, faster heart rates, shaking, and difficulty sleeping in the days after birth. The high sugar content in soda can also put a mother at higher risk for preeclampsia and other birth complications.

Eating too much sugar during the third trimester can excessively increase the weight of the baby, making the delivery difficult for both mother and child.

If you’re in the third trimester of pregnancy, now might be a good time to cut back on your soda intake. Small amounts of soda shouldn’t cause any harm, but if your consumption has become excessive, cutting back can help keep you and your baby healthy.

If you have any questions about maintaining a healthy diet during the third trimester of pregnancy, speak with your doctor.

Can you have these sodas while pregnant?

Not every soda is created equal. And if you’re pregnant and trying to decide which sodas are worth your time and which aren’t, we’ve done the research for you!

Remember, aim for 200 mg or less of caffeine and 25 grams or less of added sugar each day!

*All nutritional amounts listed are for a 12-oz can of soda.

Recommendation? Drink Coca Cola in moderation during pregnancy (less than one serving per day).

A single can of Coca Cola contains almost twice the recommended daily value of added sugar! Drinking Coca Cola often during your pregnancy might put you at a higher risk of preeclampsia or gestational diabetes.

Other Considerations: Sweetened with aspartame or SPLENDA®

The FDA has approved the consumption of aspartame during pregnancy, although some people don’t enjoy the taste. Diet sodas are much lower on sugar, which is a big win in their favor! Just remember to minimize your caffeine intake. 4 cans of Diet Coke will put you at your suggested daily caffeine limit for the day.

Recommendation? Drink Pepsi in moderation during pregnancy (less than one serving per day).

Pepsi contains more caffeine and more added sugar than Coca Cola. So if you’re an avid Pepsi fan, try to minimize your consumption while pregnant, and maybe even consider giving Coca-Cola a try.

Recommendation? Enjoy Sprite in moderation during pregnancy (less than one serving per day).

Sprite has the same sugar content as a can of Coca Cola, but without the added risk of caffeine consumption. Although the extra sugar can be problematic in large doses, this soda is on the safer side during pregnancy.

Recommendation? Try to avoid Dr. Pepper during pregnancy (less than one serving per day)!

Dr. Pepper is undoubtedly delicious, but it has nearly 3 times the recommended daily value of added sugar in a single can of soda. If you’re craving a cola, either Coca Cola or Pepsi would be a healthier choice.

Recommendation? Try to avoid Mtn. Dew during pregnancy (less than one serving per day)!

Mountain Dew has an elevated sugar content, as well as some of the highest caffeine levels of any type of soda. If you’re aiming for a truly nutrition-based pregnancy, this would be a good soda to steer clear of.

Recommendation? Drink Sunkist Orange Soda in moderation during pregnancy (less than one serving per day).

If you think it’s strange that Sunkist contains caffeine, you’re not alone! The levels are fairly low when compared to other sodas, but they are there. The sugar content is about the same as a can of Mtn. Dew.

Recommendation? Drink Barq’s Root Beer in moderation during pregnancy (less than one serving per day).

Barq’s Root Beer actually has less caffeine than a can of Sunkist soda, and less sugar as well. If you’re particularly worried about caffeine, but are still in the mood for a dark soda, root beer is an excellent option!

Recommendation? Try to avoid Fanta during pregnancy (less than one serving per day).

No caffeine here, but a whopping 73 grams of sugar in a single can! That’s 3 times the recommended daily value of added sugars! This is a sweet treat that you should enjoy sporadically.

As long as lemonade doesn’t give you heartburn, it’s a wonderful option during pregnancy. There’s no caffeine to worry about, and the sugar content is considerably lower than other sodas.

What drinks are safe during pregnancy?

There are plenty of drink options other than soda out there!

Here are a few pregnancy-tested favorites: