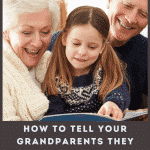 Grandparents being involved in your child’s life can be a wonderful thing. Being with your children will bring your parents or in-laws great joy and it can be a very positive relationship for your kids as well. But there are times when you may not feel comfortable having the grandparents babysit your kids and that can be an unpleasant conversation to have.

You might not want grandparents to babysit your kids if they are physically or mentally incapable, they impose, or they disregard your parenting style. The best way to tell them they can’t babysit is to set boundaries and house rules that everyone agrees to beforehand and keep communicating.

No one looks forward to having a difficult conversation like this one and it’s hard to know what the right thing to say is. Keep reading to hear our best tips on letting grandparents know they can’t babysit your kids.

Whether the grandparents don’t agree with the rules you set in your household or they’re simply not reliable enough to care for your children, there may come a time when you have to tell them they can’t babysit. Although this is a tough conversation to have, the best way to tell them is to be honest and firm, but also loving.

Let them know it’s not because you don’t want them around your children. Explain your reasoning behind it and although they may not agree, they’ll be more likely to understand.

You might be wondering, if your child’s grandparents want to spend time with your kids why would you stop them? Some parents may not have this issue at all, but it’s actually pretty common for there to be a lack of boundaries and respect when it comes to the child and grandparent relationship. This is true especially when your children are young and can’t speak up for themselves.

As new parents, you may be overzealous about the rules in your house and that’s okay. Even if you become more lenient over time, part of growing into your role as a parent is learning what boundaries and rules work for you and your family. You’re welcome to get the opinion of family members if you choose, but ultimately those decisions should be up to you and your significant other.

If any family members, including your child’s grandparents, choose not to respect the boundaries you’ve set, it’s okay to tell them they can’t babysit. It’s also okay for you to say no if you feel like they’re not capable of taking care of your children.

Saying no can be difficult sometimes, but you shouldn’t put your children in a situation you’re not comfortable with just to avoid hurting someone’s feelings.

Some grandparents want to babysit without you asking

It’s pretty common for grandparents to believe they have a right to see their grandchildren whenever they choose.

Having a great relationship with the grandparents can be an extremely positive thing, but it doesn’t always work out that way. Many new parents find that the grandparents might show up unannounced to see their kids, or might ask to babysit before you’re ready to leave them alone.

If you don’t need a babysitter, it’s okay to say no to your parents when they ask to babysit. There’s nothing wrong with letting your kids spend some time with their grandparents if you feel comfortable with that. But if they want to babysit without you asking, you don’t have to say yes.

Many grandparents will ignore your parenting wishes

Another common pitfall of letting the grandparents babysit is they don’t always respect your parenting wishes.

You may only let your child have an hour of screen time a day, but you send them to the grandparents and they spend three hours watching TV. Or, you might have a strict policy around sweets, but your kids always come home from the grandparent’s house full of sugar.

Most of the time, what they’re doing is out of love for your children. Especially with older grandparents, they sometimes feel like they know what’s best since they raised children of their own. Even if they have good intentions, it’s still important for them to respect your parenting wishes.

Older grandparents might not be physically capable of babysitting

When grandparents get older, they’re not always as self-aware as we’d like them to be.

Maybe you recognize that they’re physically incapable of taking care of your kids, but they think you’re overreacting. Dealing with the endless energy of a toddler is a lot for anyone to keep up with, and older grandparents may not be able to keep up with your younger child.

Older grandparents may also think they can take care of your kids because they’ve raised kids of their own. They may not always realize they don’t have the strength or energy that they used to. It’s great for your children to visit their grandparent’s house, but if they’re not physically capable of taking care of your kids, they shouldn’t babysit on their own.

Older grandparents might not be mentally capable of babysitting

Sometimes it can be a mental issue instead of a physical one.

For older grandparents who may be mentally declining, they may think it’s perfectly safe to babysit. But if they’re often forgetful or unable to take care of even basic tasks, your kids won’t be safe staying alone with them.

Setting boundaries with grandparents and the new baby

In some situations, you may have grandparents who naturally respect your boundaries and the rules you make for your children. But even in the best case scenario, it’s still a good idea to have a conversation with the grandparents around rules and boundaries.

Here are some possible topics you may want to discover with your parents in order to set healthy boundaries:

How soon should grandparents visit your new baby?

How soon the grandparents should visit the new baby is a personal preference, but it’s one that you as the parent should decide. There are some situations where grandparents may show up unannounced because they think they have a right to meet their new grandchildren.

No matter what your opinion is on how soon grandparents should visit, it is important for you and your significant other to have independent bonding time with your new baby before anyone comes to visit. Whether it’s your first child or you’re adjusting to life with two or three littles at home, this period of transition is a precious time between you and your family.

If you’re worried about them showing up unannounced, let them know you want some time alone with your new bundle of joy. Tell them you’ll contact them when you’re ready for visitors and politely ask them not to show up before you call.

How often should grandparents babysit?

Grandparents can be great babysitters. Instead of leaving your kids with someone you don’t know that well, leaving them with a trusted family member is a great thing. Plus, there are plenty of benefits for both your children and their grandparents if they are able to babysit.

However, it’s up to you how often the grandparents should babysit. Many families take advantage of having grandparents close by and allow them to babysit every weekend. Other families may not feel comfortable having their parents babysit all the time and only ask them when it’s absolutely necessary.

You have to find what works best for your family and what your parents are willing to do as well.

When is it time to be firm with grandparents?

Many disagreements that you have with your child’s grandparents can be figured out simply by being honest and communicating with them. Grandparents who are happy to respect boundaries may not need more than just a conversation explaining your rules and preferences.

When you’ve communicated your preferences and they refuse to follow the rules you’ve set, that’s when it’s time to be firm with the grandparents. Since you are the parent, you get to choose how you want to raise your children and your parents will have to respect that.

It’s okay if your parents don’t have the exact same rules as you as long as they’re not directly going against anything you said. Being too strict or making a big deal out of something small can cause tension between you and your child’s grandparents.

There are certain times when it’s best to let it go and avoid any unnecessary conflict.

As adults, we probably don’t iron a lot of our clothes unless something is particularly wrinkled or it’s a special occasion. But what about baby clothes? Can you iron them? Should you?  Ironing...

Continue Reading
link to My Baby Likes To Hang Upside Down (Is It Play or a Sign of Autism?)

As your baby is exploring movement and new ways to play, you may find them exhibiting behaviors that are unexpected or concerning. For instance, some babies like to hang upside down. Is this standard...